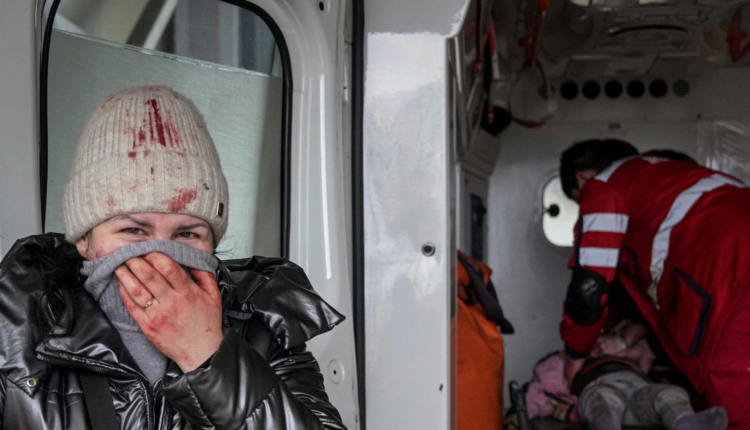 In the background, paramedics are seen attempting to revive the little girl at the back of an ambulance. (Photo: AP)

The devastating picture is reportedly of a 6-year-old girl who is among the 16 ill-fated children to die in the bloody war.

From a cyclist being struck with a rocket to buildings getting destroyed by Russian airstrikes, heart-breaking pictures and videos have emerged on the internet since Russia invaded Ukraine last week. Another heart-wrenching series of photos has surfaced which reflects the brutality of the Russian incursion. According to Daily Mail, the pictures are of a 6-year-old girl who is among the 16 ill-fated children to die in the bloody war. The deceased has been dubbed “the girl in the unicorn pyjamas”. Reportedly, the first picture shows a devastated lady who could be the girl’s mother, covering her mouth with her blood-stained hands. Distraught by the events that transpired, the woman is seen holding her daughter’s scarf, bobble hat, and slippers while her own cap is soaked in blood. In the background, paramedics are seen attempting to revive the little girl at the back of an ambulance.

The next picture captured the girl’s father who sat by her side while paramedics performed CPR in a bid to save her. The father too is seen covered in blood while he held the hand of his daughter who could not be saved. Subsequently, the girl was then shifted to a hospital in the coastal city of Mariupol. In the photo, she is still seen wearing the unicorn pyjamas. A team of doctors reportedly then cut away her clothes to assess her injuries while her father prayed and tended to her.

The final devastating photo captured the lifeless body of the girl on a stretcher lying alone in the hospital ward. As reported by Daily Mail, when attempts were being made to rescue the child, a doctor who helped pump oxygen into the girl turned to the AP photographer and said “Show this to Putin: The eyes of this child, and crying doctors.”

As Russia is advancing deeper into Ukraine, it has also ramped up its attacks on the country. Amid heavy airstrikes and bombardment, thousands of Ukrainians have been internally displaced and are forced to either seek shelter in bunkers or flee to the western borders.