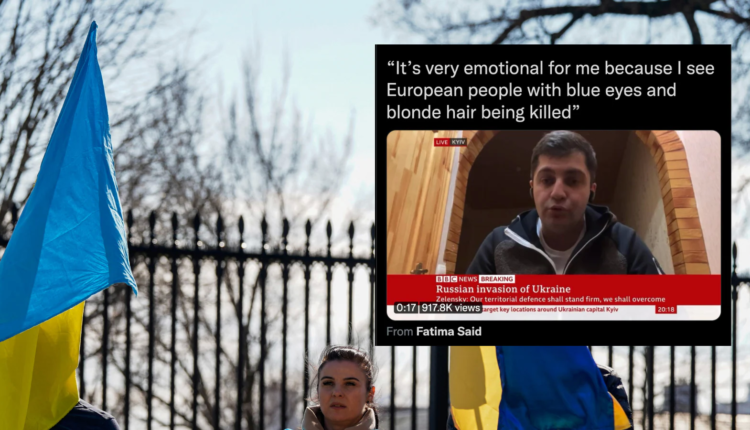 Demonstrators hold Ukrainian flags during a “Stand with Ukraine” rally against the Russian invasion of Ukraine, in front of the White House in Washington, U.S. (Photo: Reuters)

Alan MacLeod, a journalist, has tweeted a thread of allegedly racist media coverage of the Ukraine crisis.

Amid Russian invasion of Ukraine, many social media users have alleged that Western media organisations have been racist in their reportage of the conflict. There are opinions on either side of the racism debate, with the NATO and the US in the centre of it. Some Twitter users have alleged that media coverage for Asian and African conflict zones does not receive as much footage as European conflict does. Yet others have claimed that the invasion of Ukraine is not the correct time to broach the subject. Alan MacLeod, a journalist, has tweeted a thread of allegedly racist media coverage of the Ukraine crisis. The thread levels these allegations against several leading news organisations including the BBC, CBS News, Al Jazeera, BFM TV, The Daily Telegraph and ITV (UK).

Ukraine’s Deputy Chief Prosecutor, David Sakvarelidze, in BBC footage, said, “It’s very emotional for me because I see European people with blue eyes and blonde hair being killed.” This statement in particular has been facing outrage on Twitter. Following is MacLeod’s thread.

[Thread] The most racist Ukraine coverage on TV News. 1. The BBC – “It’s very emotional for me because I see European people with blue eyes and blonde hair being killed” – Ukraine’s Deputy Chief Prosecutor, David Sakvarelidze pic.twitter.com/m0LB0m00Wg

MacLeod has also tweeted about other instances of alleged racism in Western media’s coverage.

Unfortunately, most of the appeals to help them are framed as a “they’re not like the others; they’re white” argument, as my thread demonstrates.https://t.co/GfSSrrEpBW— Alan MacLeod (@AlanRMacLeod) February 27, 2022

Following is a counter narrative from a genocide researcher and expert on Twitter, specifically on the Time cover.

Let’s talk about this Time cover, which does not refer to the NATO bombing of ’99 but instead was published on Sept 26, 1995. This bombing happened in Bosnia and was a targeted air campaign of the Army of Republika Srpska. This bombing happened after Markale and Serbrenica. https://t.co/wIk7qASRZU— Arnesa Buljušmić-Kustura (@Rrrrnessa) February 28, 2022

Recently, an old opinion piece entitled “In the long run, wars make us safer and richer” that appeared in a news publication in April 2014 has been dug up by Twitter users and is being severely criticised. In it, the author of the piece asks: “So yes, war is hell — but have you considered the alternatives?” He claims that through conflict, humanity has created larger and more organised societies that reduced the risk of violent deaths of their members as well as ensured higher living standards, hence the titular claim. Twitter users took vehement exception to the piece.