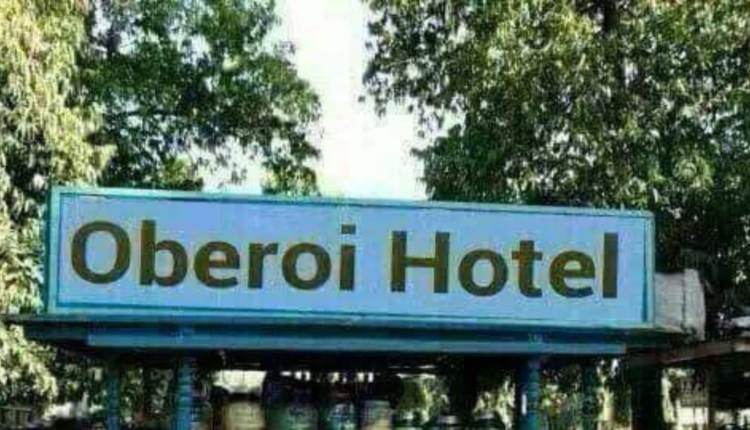 Industrialist Anand Mahindra’s latest Monday motivational post highlights the enterprising spirit of people and urges them to dream big. Mahindra shared an image on Twitter, featuring a tea stall named after a luxury hotel group headquartered in Delhi. Though the image suggests that the tea stall corner was inspired by the success of The Oberoi Group, the stall makes it clear that the roadside venture has no branch in Delhi. A disclaimer was written on the stall – “Note: We don’t have a branch in Delhi.” While sharing the photo, Mahindra urged people to “dream big” and used the hashtag Monday Motivation. Though Mahindra’s message was intended to inspire his Twitter family to dream big and then chase it with all willpower, netizens spotted one small problem. According to them, the image has been photoshopped. Several users on the microblogging site pointed it out in the comments section.

“Looks pretty photoshopped,” a user replied, while another said, “Upon looking closely it seems morphed!”

However, there were many who resonated with the motivational post and gave it a thumbs up. “Every big thing starts from small,” a tweet read on the microblogging site. Another tweet praised the humour used in the picture. The user wrote, “Best part is that they don’t have any branch in Delhi.”

Morphed or not, Mahindra never fails to surprise his Twitter fam with never-seen-before pictures and videos. A person even tweeted that he wondered how the business tycoon comes up with such “humorous pictures” every week.

I wonder how you can come up with humorous pics every week…— Sagar Jain (@sagarjainmp) February 28, 2022

The original image is stated to have been appeared in a blog dedicated to Udaipur. The 2015 blog showcases a tea stall located in Udaipur, named Bhairunath tea stall and it has been running for over a decade.

Our Favorite Road Side Food Stalls in Udaipur

In Mahindra’s picture, the name “Bhairunath” has been likely changed into “Oberoi Hotel”, while the “no branches” disclaimer seems to have been put up in place of the original text, which reads “Bhairunath tea stall, nashta centre.”