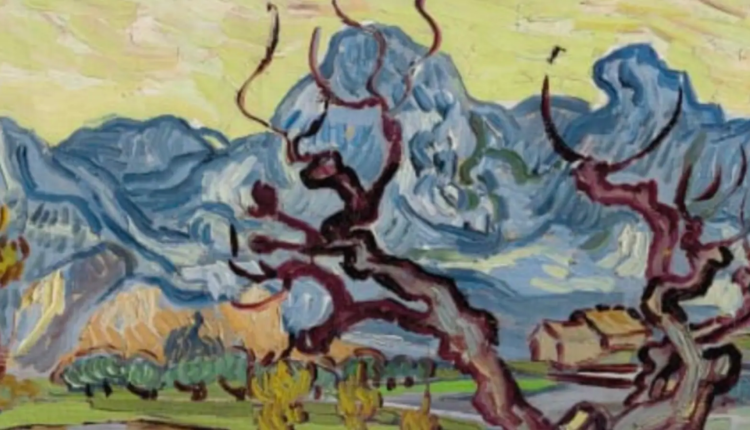 Christie’s is hoping to make an impression during its upcoming “20th Century Evening Sale” by offering Vincent van Gogh’s “Champs près des Alpilles” as an auction highlight. This oil painting has remained in private hands since its creation in 1889. “Champs près des Alpilles” is one of two paintings that Van Gogh sent to his friend Joseph Roulin, while he was staying in an asylum in Saint-Rémy-de-Provence. The Dutch painter was admitted to the institution at his request after cutting his ear off in a bout of delirium in Arles in December 1888. In this institution, Van Gogh produced works that reflected his inner turmoil, and “Champs près des Alpilles” is no exception. This painting depicts an expansive view of a bright green wheat field, where trees are framed by the monumental peaks of the Alpilles.

For Christie’s, this painting incorporates all the pictorial characteristics of Van Gogh’s style. “It was during his stay in Saint-Rémy that Van Gogh’s mature style truly emerged. He transformed the world around him into dazzling visions of often heightened color conveyed with evermore animated brushstrokes, both of which serve to imbue these canvases with a powerful — and highly influential — expressive charge. At this time, painting and nature itself took on a central importance to the artist,” states the auction house.

“Champs près des Alpilles” will go under the hammer in May at Christie’s, on the occasion of the New York “20th Century Evening Sale.” It could sell for more than $45 million, although this is a far cry from the record price of $82.5 million achieved by “Portrait du Dr. Gachet” at Christie’s in 1990.

However, bidding could rise given the prestigious provenance of this Van Gogh painting. It has always remained in private hands and has never been included in a public exhibition. According to Artnews, the painting was momentarily owned by Yves Saint Laurent and his partner Pierre Bergé, until the couple sold it to a private European collector in around 2003. It has since changed ownership once more before being offered for sale at Christie’s.

“Painted during the artist’s storied sojourn in an asylum in Saint-Rémy, and subsequently belonging to his friend Joseph Roulin, whose own image captured by Vincent now hang in museums across the world, ‘Champs près des Alpilles’ is inextricably linked to Vincent’s own tragic biography. It is a delight to bring this masterpiece by the artist to auction for the first time,” said Vanessa Fusco, co-head of Christie’s New York “20th Century Evening Sale”.

Before going under the hammer, “Champs près des Alpilles” will be exhibited in London, Taipei, Hong Kong and New York.