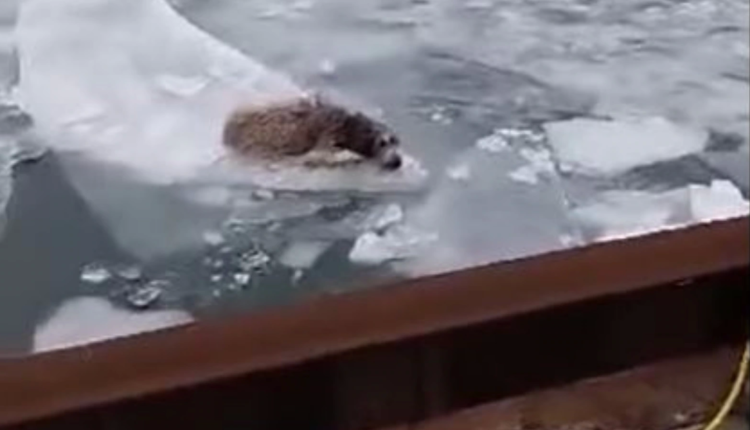 Pet dogs often go for a stroll all by themselves just to have fun from the mundane regular walks. The majority of times they come back home, however, at times they might land in trouble. Something similar happened with an adventurous labradoodle, who ran away and ended up in a frozen river. Luckily, a firefighter saw her freezing in the river and came to her rescue. The dog, Lucy, who was recently adopted got away from her owner and somehow jumped into the icy waters of the Detroit River in Michigan. Luckily, the canine didn’t drown, but she barely managed to climb onto a chunk of ice, drifting away on the river in the freezing cold.

In a joint operation, the fire department along with Wyandotte Police and the animal control rushed to help bring her out safely. In the video, a rescue owner donning orange insulated wetsuits is able to bring her near the bank using a catchpole. The rescue clip was shared by the Wyandotte Police department on Facebook.

Sharing a couple of pictures and videos, the police department shared how the rescuer risked his life to pull off the rescue. It was mentioned that he stood on a slippery ladder that was submerged in the river while his co-workers held onto him via a rope. “Truly an amazing and awesome rescue,” the post was captioned.

Wyandotte Assistant Fire Chief Tom Lyon told The Detroit Press that the pooch had those big brown eyes, she couldn’t talk but she was probably just so grateful.

Wyandotte Deputy Police Chief, Archie Hamilton shared that it was the neighbours who spotted the pet drifting on the icy water and alerted 911. “If not for that the dog would have froze to death or drowned,” Hamilton said. The police officer stated that the team thought of calling the US Coast Guard, and some officers were even up to go themselves into the freezing water, but when the firefighters showed up, they made a plan to get the poor animal out safely.