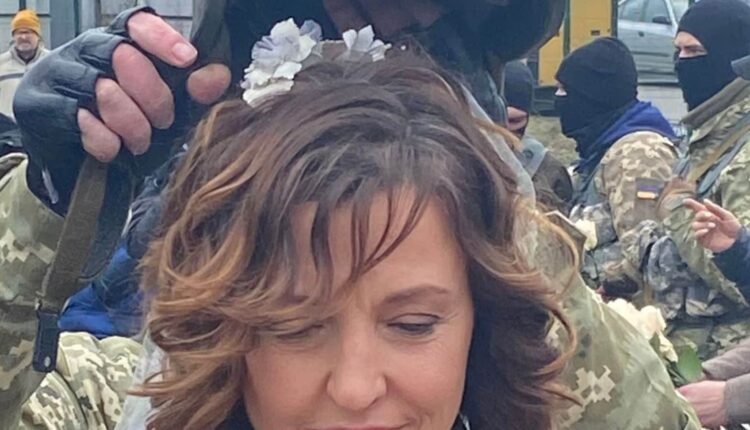 Ukraine has been under attack and bleeding ever since Russia started invading its territories. Scenes of destruction and distress, reeking of an acute humanitarian crisis, have since then started emerging on social media.

Amid the crisis, some visuals have also surfaced that reinstate a sense of hope in people’s minds and balances the turmoil by oozing positivity. One such visual was recently shared on Twitter. In a minute-long clip, two volunteer soldiers are seen getting married on the frontline of Kyiv while donning uniforms and cheery smiles.

While the groom is wearing a helmet, the bride is wearing a veil, which oddly, is going with the camouflage-print uniforms they have worn. As they establish a bond forever, people around the couple are singing in unison and glee.

The video was shared by a reporter from Kyiv, who, in the caption, wrote, “This couple Lesya and Valeriy, just got married next to the frontline in Kyiv. They are with the territorial defence.”

This couple, Lesya and Valeriy, just got married next to the frontline in Kyiv. They are with the territorial defense. pic.twitter.com/S6Z8mGpxx9

Since being shared, the clip has managed to accumulate almost 20 lakh views and roughly 70,000 impressions, including likes and retweets. Netizens seemed a bit overwhelmed to see such positive visuals emerging from a place that is currently heading towards doom.

One user sent across wishes of happiness for the couple and Ukraine.

One user retweeted, saying, “Love and humanity will conquer all.”

Love and humanity will conquer all. https://t.co/MktphpYe8t

Another said that the video is worthy of bringing “tears of joy amongst tragedy.”

Visuals such as these bring a sense of relief and go to prove that humanity finds a way. Another such wedding took place in the city of Odesa, where a couple got married inside a bomb shelter.

Ever since the invasion of Russia in Ukraine began on February 24, around two million civilians fled the nation, setting off the largest refugee crisis in Europe since World War II. In addition, Ukrainians who stayed, are ready to pick up arms and defend their country from the Kremlin catastrophe.