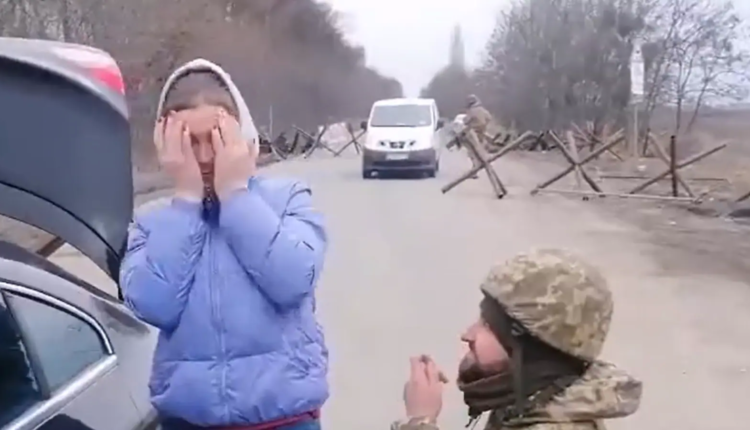 As Russia intensifies its offensive in Ukraine with heavy bombardment of cities, Ukrainians have been running for their lives and seeking refuge in neighbouring countries. The war has now entered its thirteenth-day reducing buildings, structures to rubble and claiming more lives in the conflict.

However, even during such dark times, there are moments that tend to light up anyone’s mood. One such video has gone viral on the internet where a Ukrainian soldier gets on his knees not to aim at someone but rather propose to his ladylove.

The video, which was shared by CBS Miami anchor Kendis Gibson on his Twitter handle, shows the heart-warming moment when the soldier confessed his love for the lady. “Kinda hard to beat this proposal,” Kendis wrote.

In the nearly 2-minute long video, Ukrainian soldiers can be seen searching some civilians after stopping their car at a military checkpoint. The civilians can be seen standing with their hands placed on top of the car while the soldiers frisked them.

In the midst of the checking, a soldier gets on his knees behind one of the girls with a ring and flowers in his hand. Soon, the soldiers and civilians gather around the couple recording the touching moment on their phones and cheering for them. Music can also be heard in the video while the soldier presented a ring to the lady.

Surprised by the unexpected event, the girl is seen getting overwhelmed with emotions and lovingly hugging the soldier.

The video garnered more than 1 million views on Twitter with users dropping hearts for the couple in the comment section. “Spread love not war,” wrote one user while another said that it was a heart-touching scene during a war.

A heart touching scene during a war time in #ukraine where the soldier proposed a wedding to his girlfriend. The soldiers and citizens were full of applauses and joy.— CF CryptoTech (@Cfhau1) March 8, 2022

Since the invasion of Ukraine by Russia, the internet has been replete with disheartening visuals of airstrikes and shooting in the war-ravaged country. Amid escalating tensions, the video gave the much-needed dose of love for many.

Do Newborns Have Tears or Sweat? No. Here’s Why