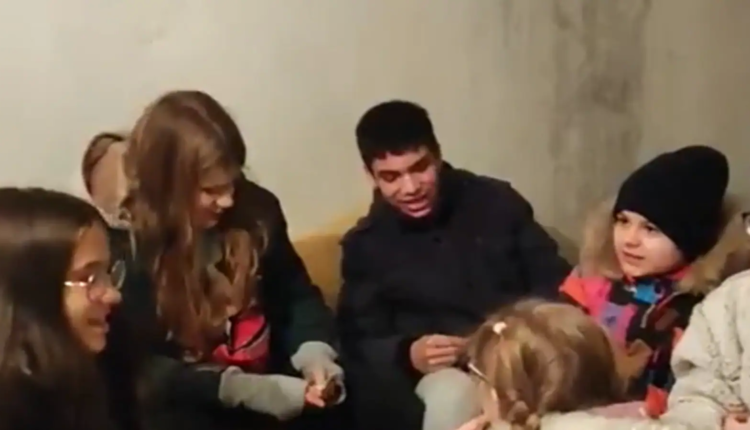 Despite harsh sanctions and global backlash, Russia continues its onslaught in Ukraine. Several heart-wrenching clips from the war-struck nation have left the world in tears. Recently, Ukraine’s foreign ministry tweeted a video of children, who are hiding in a bomb shelter and singing their national anthem. The 23-second clip shows six kids sitting in a circle, playing a game of cards, and singing the anthem.

Previously, several videos of Ukrainian citizens doing their part to resist the Russian invasion and finding strength in their national anthem were widely shared on social media. The Ukrainian anthem was adopted after the fall of the Soviet Union, and it has now become a way to express solidarity and inspire courage amid Russia’s invasion.

As far as the history of the Kyiv anthem is concerned, it originates from a 19th-century Ukrainian poem titled ‘Ukraine Is Not Dead Yet’. Singing the Kyiv anthem was banned when Ukraine became part of the Soviet Union.

When the USSR was split, the Kyiv anthem regained its anthemic status. The country’s parliamentary body, in 2003, changed the song’s first line to ‘Ukraine’s freedom has not yet perished, nor has her glory’, which earlier was ‘Ukraine is not dead yet.’

So far, 352 civilians have been killed in Ukraine, including at least 14 children. 1,684 people, including 116 kids, have also been wounded in the deadly Russian attacks, Ukraine President Volodymyr Zelensky said on Monday, February 28. One Indian student has also lost his life in the war.

Meanwhile, Oleg Synegubov, who is the head of the embattled country’s Kharkiv region, on March 1 stated that Russian missile attacks hit the centre of Ukraine’s second-largest city, including residential areas and the city administration building.

Ceasefire talks that took place on February 28, failed to reach a breakthrough and negotiators have not stated when the new round of discussion would take place.