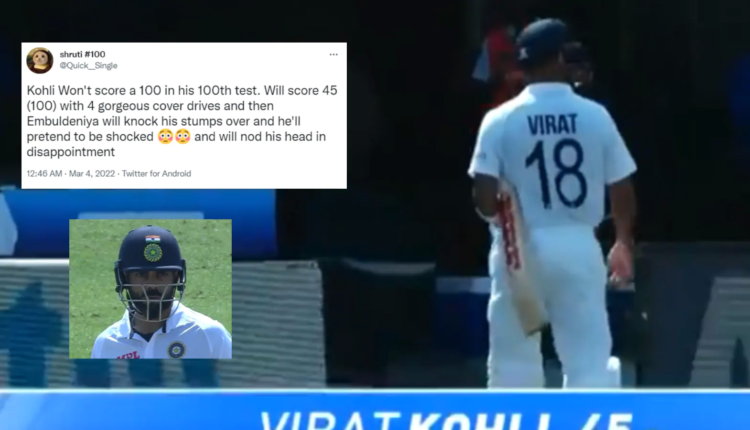 Virat Kohli was dismissed for 45 in the first innings of his 100th Test by Lasith Embuldeniya. (Disney+ Hotstar)

Virat Kohli fan may have just put Jofra Archer’s supernatural abilities to shame with a single tweet ahead of the India-Sri Lanka Test match in Mohali.

A Twitter user may have just put Jofra Archer’s “supernatural abilities” to shame after they eerily predicted Virat Kohli’s dismissal in his 100th Test against Sri Lanka in Mohali on Friday. Captain Rohit Sharma put his men to bat first after a toss win and India got off to a decent start. After both the openers Sharma and Mayank Agarwal returned to the pavilion with the score reading 80-2, Kohli along with Hanuma Vihari built a solid partnership to take India to 170 before Kohli got undone by a cheeky delivery by Lasith Embuldeniya.

The former India captain was deceived by Embuldeniya’s sharp turn and got castled on 45 off 76 balls. Kohli was in disbelief after the dismissal and shake his head before walking back towards the pavilion.

Although the heartbreak of Kohli’s century drought in international cricket was almost palpable, it was a tweet by a cricket fan that blew up for all the strange reasons.

“Kohli Won’t score a 100 in his 100th test. Will score 45 (100) with 4 gorgeous cover drives and then Embuldeniya will knock his stumps over and he’ll pretend to be shocked and will nod his head in disappointment,” user who goes by the handle @Quick__Single tweeted many hours ahead of the India-Sri Lanka Test match.

Kohli reacting with shock plastered all over his face? Check.

However, this was not the first time, when Embuldeniya troubled Kohli in the match. He got off the mark with a leading-edge while attempting a flick off Embuldeniya, but fortunately, the ball landed in the safe zone.

This US Toddler Has Uncombable Hair Syndrome, a Rare Genetic Condition

Finding Yourself Naked in Public Place? Dreams Vary According to Where We Live: Study