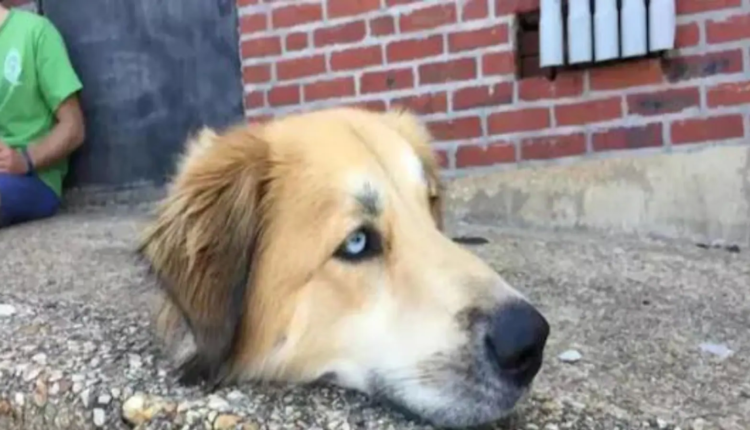 A picture of a golden retriever dog is going viral on the internet in which the pooch’s head appears to be decapitated on a concrete floor.

The picture shared on Reddit will leave you awestruck and will also make you worry about the dog. Surprisingly the dog’s eyes are open in the picture but his body is not visible. The picture remains a mystery for netizens as they can’t identify the truth behind it even after zooming in the picture repeatedly.

The photo has been shared by Nathan Sievers, a resident of Baltimore in the United States. Nathan has captioned the picture, “My dog laying down with his head on the kerb… Looks like he’s been decapitated.”

The picture has gone viral and people are asking Nathan to share another picture of the dog to ensure that the canine is ok, Newsweek reported.

“I will need another picture of the dog to verify this,” commented a netizen. Another user wrote that the dog’s head is actually of the man in the background of the picture.

Here is the reality behind the picture.

The photo is actually an optical illusion in which the dog can be seen laying his head down on the edge of the wall. The camera’s angle is such that it hides the body of the animal perfectly.

According to a post by Nathan, he went to meet with one of his friends when his dog laid his head down on a concrete floor that was sloping downwards. This hid its body and he took the picture at such an angle so that the dog’s head can be seen floating there.

Following a tsunami of comments from social media users, Nathan shared the picture of the entire body of the dog and said that is for people who want to confirm whether my dog is alive or not.

iPhone SE (2022) RAM Reportedly Gets Bump Over Predecessor, Identical to That of iPhone 13