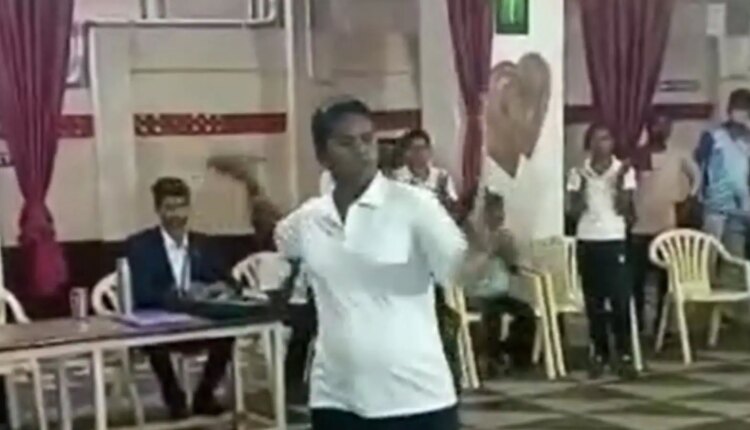 ‘Anything can be achieved if there is courage in mind’- To bring justice to the phrase, a pregnant woman carrying for nine months, created a record by performing Silambam for uninterrupted six hours at Pattukkottai in Tamil Nadu’s Thanjavur district on the occasion of International Women’s Day.

Sheela Das (29), a resident from Anaikadu near Pattukkottai has been a boxing and Silambam trainer who wanted to create a record in the art that she is well-versed in. Following this, Anaikadu Silambam Association had organized the event in which the 9-month-pregnant Sheela showed an amazing Silambam performance for which she was awarded a certificate of merit by the Nobel World Records.

A black badge holder in karate, boxing and weightlifting, Sheela Das also holds the ‘Iron Woman’ title with a national record in the weightlifting category. During the competition, many contestants participated and the full-term pregnant Sheela Das was one among them. To everyone’s surprise, the pregnant woman’s record which was set for five hours, exceeded by an hour and took to a total of six hours – three hours of single Silambam and three hours of double Silambam respectively.

Speaking to reporters, Sheela said, “I have been interested in sports right from the age of 7 and have learned Silambam, boxing, karate and participated in various competitions and won many prizes. Since I am pregnant, it was only with mental courage that I was able to achieve this feat beyond physical exertion,” she said.

Silambam is an Indian martial art that originated from Tamil Nadu. It derives from the Tamil word ‘Silambu’, meaning sound. Silambam style is mentioned in Tamil Sangam literature. Apparently, Silambam is performed with the aid of some specific weapons, primarily a special type of bamboo is used which is found mostly in the Kurinji hills. According to experts, Silambam is a good form of cardio workout that improves heart function and blood circulation. It also helps in weight reduction and shaping of body by burning calories. With relieving mental stress and fatigue, it also improves body flexibility and reflexive movement of muscles.