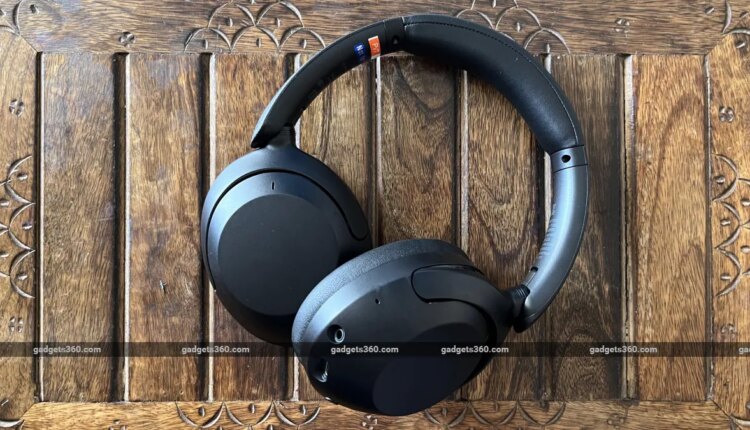 Sony’s ‘Extra Bass’ audio products are carefully tuned for more aggression and attack, appealing to listeners who want heavier bass in their sound. Interestingly, the Extra Bass range includes both headphones and earphones, such as the excellent WH-XB900N which I reviewed in 2019. The company’s latest launch is the successor to this pair of headphones, and promises more of the same qualities and capabilities, that too at a more attractive price.

Priced at Rs. 14,990 in India, the Sony WH-XB910N wireless headphones feature both wired and wireless connectivity, touch controls, app support, active noise cancellation, and LDAC Bluetooth codec support. On paper, this is a well-equipped pair of headphones that promises the famed ‘Extra Bass’ tuning, but is it worth the price? Find out in this review.

While high-end flagship headphones such as the Sony WH-1000XM4 and JBL Tour One are designed to be sleek and portable, the Sony WH-XB910N hasn’t gotten the same design treatment in my opinion, possibly due to its lower price. That’s not to say this pair of headphones looks bad; I quite like how the XB910N looks, but the styling is a bit raw and basic, with very few frills. In fact, it looks about right for a pair of headphones with this set of features and price.

The earcups are quite big and completely covered my ears and then some. There are just two buttons on the left ear cup. Sony has gone with a monotone colour scheme with a single shade of black on every visible part of this headset. Even the finish of the plastics feels a bit raw.

Although it felt a bit bulky, the Sony WH-XB910N was comfortable even over long listening sessions thanks to thick padding around the ear cups and on the headband. The padding also ensured good noise isolation which helped improve the effectiveness of active noise cancellation. The headset is foldable, and the sales package includes a hard carry case, a short charging cable, and a 3.5mm stereo cable for wired connectivity.

The Sony WH-XB910N headset has just two physical buttons; one for power and the other for cycling through ANC and hear-through modes.You get a USB Type-C port for charging and a 3.5mm socket for wired connectivity. There is no wear detection sensor to automatically play and pause music when the headphones are put on or taken off, but the headset can turn itself off after a set amount of idle time.

There is USB Type-C charging and optional 3.5mm wired connectivity on the Sony WH-XB910N headphones

The right ear cup of the headphones has a touch panel to control playback, volume, and your phone’s voice assistant. The tap and swipe controls are not customisable, but are simple and intuitive enough to get used to. Placing your palm on the right ear cup activates quick-attention mode, which reduces the volume without pausing playback, and also activates the hear-through ANC mode to let you have quick conversations. The controls worked well enough for the most part without too many inadvertent triggers.

Like most of Sony’s mid-range and premium headsets, the Sony WH-XB910N gets app support through the Headphones Connect app. Once the headphones are paired, the app lets you set the equaliser, intensity of the ANC and hear-through modes, Bluetooth connection quality, timer for auto power-off, and your choice of default voice assistant, among others. You can also check which Bluetooth codec is in operation and the exact battery level of the headphones through the app.

The app allows you to activate multi-point connectivity for up to two devices simultaneously, but this disables the LDAC Bluetooth codec on the headset. It’s possible to choose either the default voice assistant on your smartphone, or specifically set up Google Assistant or Alexa to detect and work with the headset independently, although you’ll still need your smartphone near you for Internet connectivity.

The Sony WH-XB910N headphones have 40mm dynamic drivers and a frequency response range of 20-40,000Hz. Bluetooth 5.2 is used for connectivity, with support for the SBC, AAC, and LDAC Bluetooth codecs. Other features include Google Fast Pair, 360 Reality Audio, and Adaptive Sound Control which is said to automatically detect your surroundings and set the ANC or transparency to optimal levels.

Battery life on the headphones is very good, and the Sony WH-XB910N ran for around 28 hours on a single charge with ANC on, the LDAC codec in operation, and the volume at moderate levels. There is fast charging, and Sony claims that a 10-minute charge will deliver around four and a half hours of listening time.

As expected, the Sony WH-XB910N is all about the bass

Many headphones and earphones are marketed as being ‘bass-friendly’, but Sony’s Extra Bass range is among the few that truly lives up to the hype. Like the WH-XB900N before it, the Sony WH-XB910N is unashamedly bass-oriented, and interestingly, manages to pull off this sonic signature without as much listener fatigue as I had expected.

Credit for this goes to the careful tuning that makes for powerful sub-bass that doesn’t feel too rough and unrefined, and doesn’t significantly overpower the rest of the frequency range. There’s also the fact that the LDAC Bluetooth codec allows for better detail and further refinement of the sound, making for a level of finishing that I wouldn’t ordinarily expect to hear on a pair of bass-focused headphones.

The sound is expectedly heavy on bass and aggression, but there’s plenty of detail to be heard as well on the Sony WH-XB910N headphones

That said, there’s definitely more sub-bass aggression on offer here, as compared to the Sony WH-XB900N. At the highest volume levels and with the most aggressive tracks, this did tend to cause a bit of listener fatigue. However, in general, I found it to be very enjoyable with much of the electronic and popular music that I listen to.

Listening to Go by The Chemical Brothers, the catchy beat naturally sounded quite different compared to what I’ve heard on other similarly priced headsets, thanks to the very distinct thump and aggression that the ‘Extra Bass’ tuning brings to the sound. This was the case with just about any fast-paced track on the Sony WH-XB910N, which offered almost a nightclub experience, where you would expect giant subwoofers and loud, aggressive sound.

Purists and audiophiles would ordinarily stay away from this kind of sonic signature, but the Sony WH-XB910N isn’t meant for such people and doesn’t even pretend to deliver what they expect. This is a decidedly fun-sounding pair of headphones that does exactly what it’s supposed to – bump up the bass. However, the advanced codec support and tuning didn’t make the sound muddy or rough, and there was still plenty of detail to be heard in the mid-range and highs.

With So Am I by Ty Dolla $ign, the punchy beat definitely took centrestage, but never at the cost of the rhythm and lyrics. The vocals were clean and distinct, as was the WH-XB910N’s ability to catch faint elements in the tune. The highs had a unique sense of sharpness that struck powerfully, but never felt too piercing. With the volume at around the 70 percent level, the sound felt intense, yet never stifling or fatiguing.

Active noise cancellation and ambient sound mode on the Sony WH-XB910N headphones was considerably less impressive than the flagship experience on offer with the WH-1000XM4 headphones, but it was decent nonetheless. The isolation felt strong, but some household and urban outdoor sounds still managed to sneak through. However, things did sound noticeably more silent, making for an improved listening experience with both music and audio books.

The adaptive sound control feature was useful since I could adjust ANC and hear-through modes according to my surroundings. I still found it easier to simply control these manually as per my preferences.

The Sony WH-XB910N headphones were decent for calls, both indoors and outdoors, and connection stability wasn’t a problem even at distances of up to 4m. Improvements in LDAC stability were noticeable as well, with the headphones holding a stable connection even with 990kbps LDAC sampling in operation.

Many listeners want headphones that are bass-friendly, and the Sony WH-XB910N is aimed specifically at such users. Unlike most manufacturers who claim to offer better bass, Sony does indeed live up to the ‘Extra Bass’ label, and sweetens the deal with decent active noise cancellation, app support, and detailed sound thanks to the LDAC Bluetooth codec support. The price of Rs. 14,990 is a bonus, making this an excellent pair of headphones in terms of value.

The bass can be fatiguing at times when listening to some music genres, and some tracks might not sound very good with this level of aggression in the bass. Some listeners might not like the heavy ‘modification’ of the sound either. That said, you won’t find another pair of headphones in this price range with such features that so unashamedly and delightfully serves up punchy bass. If you’re looking for a more balanced listening experience, consider options such as the JBL Tour One instead.