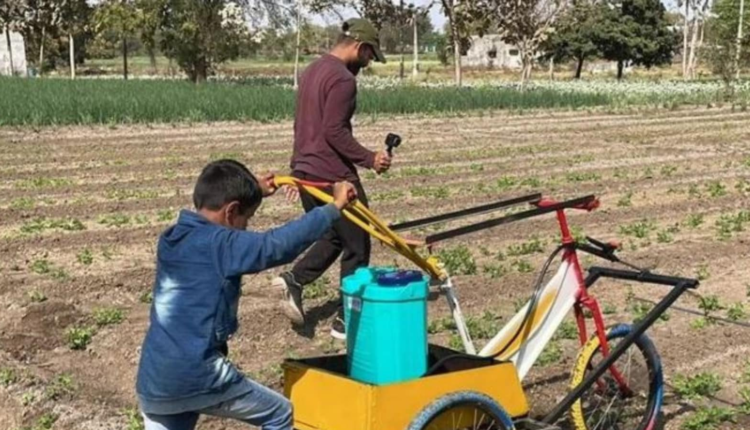 Shark Tank India found one of its stars in ‘Jugaadu Kamlesh’, a young entrepreneur who pitched a functional pesticide spraying machine from scratch with bare minimum resources available to him. In the episode, he highlighted the problem faced by farmers due to carrying heavy pesticide tanks on their backs. In a bid to solve it, Kamlesh toiled for 7 years and innovated the simple yet effective machine which he eventually brought to Shark Tank India. His innovation and personality had everyone bowled over, especially one of the Sharks and Lenskart CEO Peyush Bansal. Peyush had stepped up to help Kamlesh and given him Rs 10 lakh in return for 40% equity. He also offered him an interest-free loan of Rs 20 lakh. If you’ve been wondering what Kamlesh has been up to since then, you’re not alone.

Peyush Bansal wrote in an Instagram post, “Everyone I meet these days has one question….what is update on Kamlesh from @sharktank.india?” Adding that he doesn’t believe in talking about things till something is achieved, he shared an update anyway on popular demand. “We have initiated a process of design and consumer validation of the cart with help of a team of professional Industrial designers,” Bansal wrote. He added that the design team had visited Malegaon and nearby farms, spent time with different crops and farmers, with Kamlesh, Naru and gathered a lot of feedback. Bansal then explained the biggest concerns and the next steps, and ended the post with a promise to keep you updated.

As soon as Kamlesh’s episode was telecasted, Twitterati were quick to react to the inspiring tale of perseverance and willpower. Impressed by Kamlesh, one user wrote on Twitter, ‘Folks like Kamlesh truly represent the robust potential of our country.’ Another wrote, ‘Jugaadu Kamlesh is probably one of the best things that has happened to Shark Tank India so far.’ Hailing from a small village in Malegaon, Maharashtra, Kamlesh beat all odds to solve a problem that bothered numerous farmers in India, including his own father.

Recently, some Shark Tank pitchers have been making headlines for taking a dig at the Sharks for deriding their endeavours. The heartening fact seems to be that they too, like Kamlesh, have not given up on their entrepreneurial pursuits.