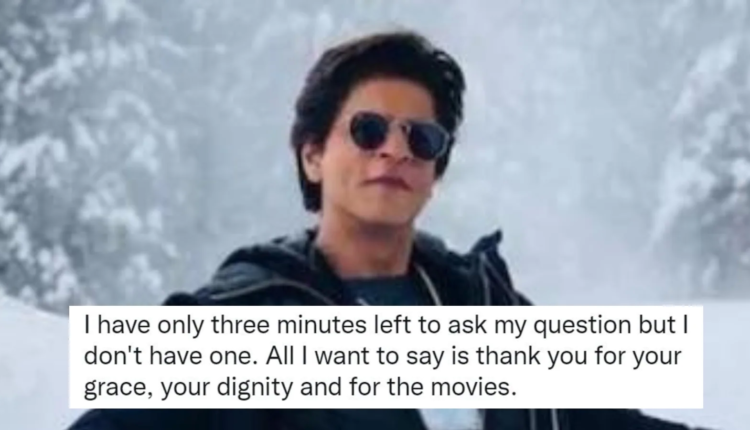 Shah Rukh Khan not only surprised fans with the release date of Pathaan but soon after, marked his return to Twitter with an #AskSRK session. Once again, the SRK brand of humour charmed fans and had them flooding his feed with questions in no time. Shah Rukh is known not only for his funny side, but also a deeply wise side. His Twitter sessions have often been proof of that. While many fans asked him questions on Pathaan, his look for the movie and other upcoming films during yesterday’s 10-minute session, one fan tweeted, “I have only three minutes left to ask my question but I don’t have one. All I want to say is thank you for your grace, your dignity and for the movies.”

SRK’s answer is no surprise to his fans, but they found it touching to see it anyway. The actor tweeted back, “Dignity Respect Kindness are the hallmark of a life well led. I try very hard.”

Was never an insane fan (pls don’t cuss at me) but truly, mans got that fan base for a reason. Staying humble is an art, something Shah Rukh excels in. https://t.co/Wscgu4lnb7— Rida (@ridaalodhii) March 2, 2022

Shah Rukh Khan, on Wednesday, surprised his fans by announcing the release date of his most-anticipated film Pathaan. Co-starring Deepika Padukone and John Abraham, the film will see SRK’s comeback on the big screen after his 2018 film Zero and will release on January 25, 2023. The film is backed by Yash Raj Films and is directed by War helmer Siddharth Anand. The first teaser featured Deepika and John introducing Shah Rukh as Pathan.