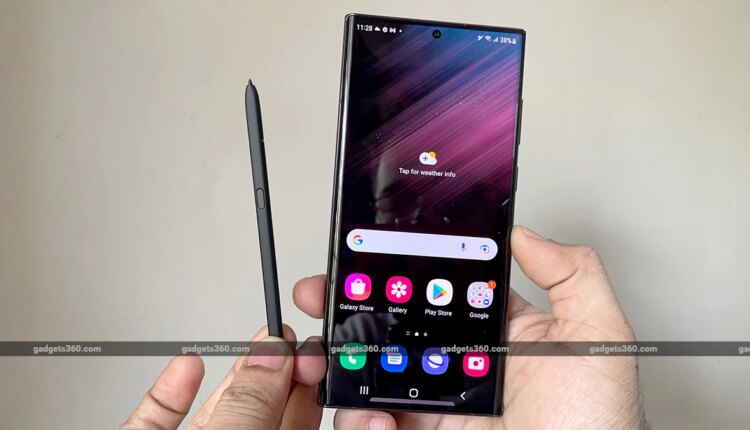 Samsung’s Galaxy S22 Ultra, the latest flagship phone from the South Korean tech giant, was put through a durability test by YouTube channel JerryRigEverything to determine the resistance of the phone. The test included a series of rigorous rounds where the Samsung phone was exposed to scratches and a bend test. The smartphone began to show scratches after a certain Mohs level but succeeded the bend test. The Galaxy S22 Ultra was launched in February, with premium features such as a 108-megapixel primary camera and S Pen compatibility.

The video posted by Zack Nelson on his channel JerryRigsEverything began with a regular scratch test. The Galaxy S22 Ultra but does not come with a screen protector. The device began to show scratches at Mohs hardness level 6, with deeper scratches at level 7. This is similar to most flagship phones including the Pixel 6 Pro and even last year’s OnePlus 9 Pro.

The frame of the Galaxy S22 Ultra is made of metal and it got scratched with a stainless-steel blade. The buttons and the S Pen of the smartphone are made of metal as well and the stylus was also put through the durability test. The S Pen was broken in half so that the insides could be inspected. The construction of the new S Pen was found to be similar to the previous generation model. It comes with a water-resistant build and a rechargeable capacitor. The entire frame is made of metal and was scratched with a stainless-steel blade.

It is to be noted that the razor blade failed to leave a mark on the back of the Galaxy S22 Ultra’s Phantom Black matte back cover. Its camera is built with durable glass and the rings for protection around the camera are made of something comparable to anodised metal. The protective rings retained marks from the steel blade.

Nelson also charred parts of the screen with his lighter and found that the ultrasonic fingerprint was still functional even after the detection area had been scratched.

Most impressively, the smartphone showed no sign of bending or bulking when Nelson tried to bend it under hard pressure using his hands. The Galaxy S22 Ultra successfully survived JerryRigsEverything’s durability test.