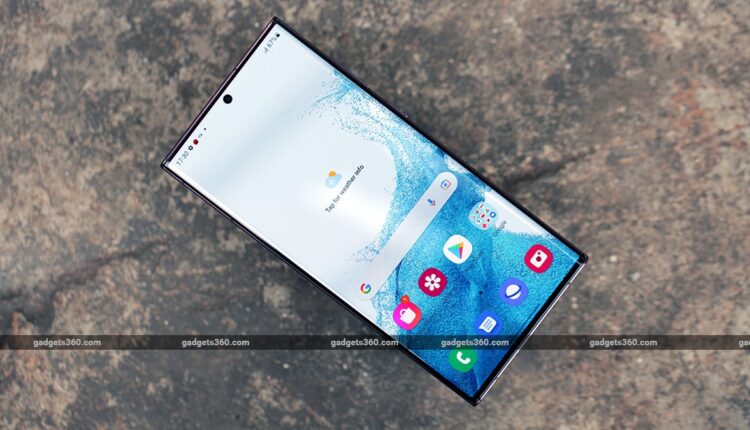 The Samsung Galaxy S22 Ultra sports a large 6.8-inch display with a centred hole-punch cutout at the top. This panel has very thin bezels at the top and bottom. Its sides follow the curvature of the aluminium frame, making this phone look super premium, and this also helps to mask its actual width. The Galaxy S22 Ultra tips the scales at 228g and this weight is noticeable in the hand. However, Samsung has distributed the weight quite well which helps with one-handed use.

The Samsung Galaxy S22 Ultra has a quad-camera setup on the back, but it isn’t raised like we’ve seen on the Galaxy S22 or even the Galaxy S21 Ultra (Review). Instead, the individual camera lenses  jut out of the body, giving the rear a more minimalist look. Another ring houses the laser autofocus sensor. The rest of the back panel is completely flat and plain, except for a Samsung logo. On the bottom, the phone has the S Pen tucked away in its own silo, a USB Type-C port, a speaker, and the SIM tray. The top of the frame only has a microphone.

Samsung has long used its home-grown Exynos SoCs for the Galaxy S series in India, but things have changed this time. The Samsung Galaxy S22 Ultra is powered by the Qualcomm Snapdragon 8 Gen 1 SoC, which is currently the most powerful SoC you can get in an Android smartphone. Storage expansion isn’t available, but even the base storage should be adequate for most users.

The big 6.8-inch AMOLED display sports a quad-HD+ resolution and a 120Hz peak refresh rate. This panel is HDR10+ certified and has a peak brightness of 1750 nits. The lower half has an integrated ultrasonic fingerprint scanner. Samsung has used Corning Gorilla Glass Victus+ at the front and the back of this phone for scratch protection. The Galaxy S22 Ultra has a wide range of wireless connectivity standards such as Bluetooth 5.2, Wi-Fi 6, Ultra-wideband (UWB), NFC, and 5G as well as 4G VoLTE. The SIM tray has space for two physical nano-SIMs, or you can use one physical SIM and an eSIM.

The Samsung Galaxy S22 Ultra and the S Pen are IP68 rated for dust and water resistance. The phone also has stereo speakers that are loud and work with Dolby Atmos.

Samsung has packed the Galaxy S22 Ultra with a 5,000mAh battery. It’s the same capacity that last year’s Galaxy S21 Ultra had. This is commendable considering this phone is roughly the same size as its predecessor and some of the space inside the chassis has been allocated to store the S Pen. The Galaxy S22 Ultra can change at up to 45W. You don’t get a charger in the box; only a USB Type-C to Type-C cable.

Samsung ships the Galaxy S22 Ultra with One UI 4.1, which is based on Android 12. My unit was running the February 2022 Android security patch but it received an update to the March patch during the review period. Samsung promises four years of OS upgrades and five years of security updates for the Galaxy S22 series, which should keep it relevant for quite some time.

The UI is polished and feels intuitive. I never had to spend too much time searching for the right setting or menu. Samsung does preinstall a number of apps such as Spotify, Facebook, and Netflix, apart from its own apps and others from Microsoft and Google. Samsung’s apps such as My Galaxy and the Galaxy Store were pushed several spammy notifications.

The user interface of the Samsung Galaxy S22 Ultra feels exactly like that of any other Galaxy S series smartphone, right until you pull the S Pen out. That’s when the Galaxy Note genes spring into action. The phone brings up a quick actions menu with a list of S Pen features every time you eject the stylus from its silo. You can add your own shortcuts to frequently used apps here. Pulling the S Pen out with the screen off allows you to take quick notes. This is quite handy when you need to quickly jot something down on the go.

Many features from Android 12 such as privacy indicators that notify you when the camera or microphone are being accessed, are present. It also has an indicator for clipboard access but this needs to be enabled. The permission manager gives you a complete list of apps that have accessed your location and the different sensors on the smartphone.

Samsung has a ‘Game booster’ feature that lets you block distractions while gaming. I noticed an ‘Auto manage’ performance toggle that claimed to throttle performance when temperatures got too high. This can be switched off to prevent performance drops. Samsung was recently in the news for throttling the performance of nearly 10,000 apps using its Game Optimising Service. Samsung will reportedly be rolling out a software update to allow users to disable this.

The Samsung Galaxy S22 Ultra has a crisp AMOLED display with excellent viewing angles and punchy colours. This made watching videos very enjoyable and the stereo speakers added to that experience. Performance was snappy and even heavy apps and games were quick to load.. Thanks to the 12GB of RAM, multitasking was a breeze. Samsung does allow up to 8GB of storage to be allocated as additional RAM. It was set to use 4GB of storage by default on my unit. Samsung’s ultrasonic fingerprint scanner worked very well and never needed more than a single attempt to unlock the phone. Face recognition was also quick and fairly reliable.

Besides taking notes, the S Pen can also be used as a remote for the phone’s cameras. It allows you to switch between different sensors and shooting modes, and of course take a picture. It is also quite useful while browsing websites as you can hover the tip of the S Pen over hyperlinks to load previews of the pages they lead to.

I ran a few synthetic benchmarks on the Samsung Galaxy S22 Ultra. In AnTuTu, the phone managed to score 8,51,648 points, which was lower than what the Motorola Edge 30 Pro (Review) as well as the iQoo 9 Pro (Review) scored. In Geekbench 5’s single-core and multi-core tests, the phone scored 1,231 and 3,313 points respectively. The Galaxy S22 Ultra fared well in graphics benchmarks. maxing out 3DMark’s Sling Shot test suite. This is among the top performers out there, but it isn’t the best, at least in terms of benchmark scores.

Real-world gaming performance was good and I could play Asphalt 9: Legends at the ‘High Quality’ preset and full-HD+ resolution without any issues. However, I did notice the S22 Ultra getting warm. I played Call Of Duty: Mobile at the ‘Very High’ graphics settings and ‘Max’ frame rate at full-HD+ resolution. The Galaxy S22 Ultra could run it well at these settings, but after about 20 minutes of playing, I noticed a six percent drop in the battery level and the phone was slightly warm to the touch. If you tend to play for long durations, you will notice the upper half of the phone getting warm.

Battery life was great for my usage, and the Samsung Galaxy S22 Ultra generally lasted for a day and a half without any issues. However, I did notice a quicker drop in the battery level after gaming or during camera usage. In our HD video loop test, the phone lasted 16 hours and 21 minutes before shutting down, which is a decent time.

Samsung claims that the Galaxy S22 Ultra supports 45W fast charging, provided you purchase a compatible charger separately. Samsung didn’t send me its own charger to verify the claim, so I tried a 68W USB-PD standard charger that I had. It’s hard to say what exact rate it was able to charge the phone at, but the Galaxy S22 Ultra got from zero to 60 percent in 30 minutes and up to 95 percent in an hour, which is pretty quick. This phone can charge wirelessly at 15W and can wirelessly powershare as well.

Samsung hasn’t fiddled much with the camera setup on the Galaxy S22 Ultra compared to its predecessor. However it does claim to deliver improved low light performance, which is marketed as “Nightography”. The Galaxy S22 Ultra has a versatile quad-camera setup consisting of a 108-megapixel primary camera that saves nona-binned photos by default, resulting in 12-megapixel saved files. This phone also has a 12-megapixel ultra-wide-angle camera with a 120-degree field of view. The other two cameras have 10-megapixel sensors each, with 3X and 10X periscope-style optical zoom lenses. For selfies, the phone has a 40-megapixel front camera.

The 100X ‘Space Zoom’ capability, first seen on the Galaxy S20 Ultra, is still present. Framing a shot at higher zoom levels is a lot easier now, and the same implementation was seen in the Galaxy S21 Ultra. The moment you go beyond 20X, a secondary viewfinder pops up with a snapshot of the frame at 20X along with crosshairs to help guide you to your subject. Once focus has been locked and your hands are steady enough, the secondary viewfinder turns yellow indicating that the device is ready to take the shot.

Apart from the 3X and 10X optical zoom levels of the two respective telephoto cameras, the camera app offers hard stops at 2X, 4X, 30X, and 100X. I found image quality to be very good at the optical zoom levels but it dips when you the phone uses hybrid zoom beyond that. Objects shot at 100X were recognisable but didn’t have the best quality.

Daylight shots taken with the primary camera had very good dynamic range. Autofocus was quick and colours were accurate. Switching to the ultra-wide-angle camera did not cause a noticeable shift in colour tone but it did cause a slight dip in detail, which was evident after magnifying shots.

Close-ups turned out very good, with pleasing sharpness. The laser autofocus ensured very little to no focus hunting even in low light. Samsung has a focus enhancer feature that automatically switches to the ultra-wide-angle camera to help capture extreme close-ups or macro images. For portraits, the Galaxy S22 Ultra switches to the 3X telephoto camera by default but you do can switch back to the primary camera if you need a wider perspective. Images shot in Portrait mode had excellent edge detection and punchy colours.

Low-light photos taken with the Samsung Galaxy S22 Ultra turned good enough to be shared directly on social media, without needing to bother with Night mode. However, I noticed some noise in the darker areas of poorly lit scenes upon closer examination, which can be eliminated if you use Night mode. You can use the telephoto cameras even in low-light conditions but colour accuracy is a bit off. In Night mode, you are restricted to 10X zoom and the phone only uses the primary or 10X telephoto cameras.

Selfies taken with the 40-megapixel shooter were pixel-binned to 10-megapixels and came out well whether taken in daylight or low light. Video recording topped out at 8K 24fps for the primary camera but the frame is heavily cropped at this resolution in order to stabilise the footage. The selfie camera can record up to 4K 60fps videos. Videos were quite detailed, with good stabilisation and accurate colours in daylight as well as low light.

The Galaxy S22 Ultra sports powerful hardware and polished software that together deliver a flagship experience. The Qualcomm Snapdragon 8 Gen 1 SoC can handle pretty much anything you throw at it. Samsung has maintained its lead in terms of camera performance over most of the competition. If you are a heavy user, you might notice the Snapdragon 8 Gen 1 SoC getting warm under load. The high price will also be a deterrent for many fans.