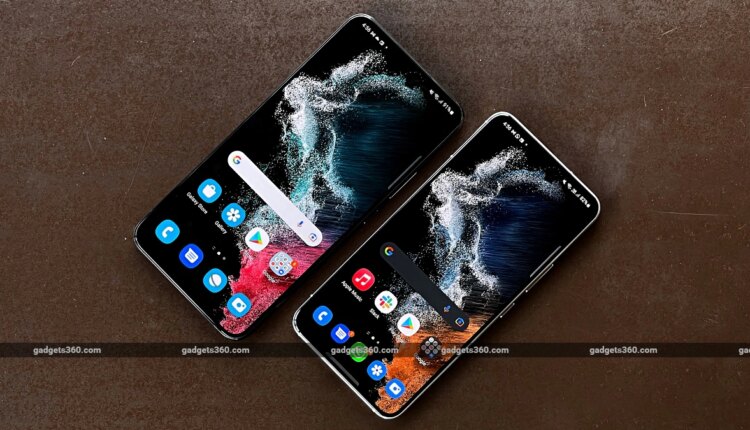 The Samsung Galaxy S22 and Galaxy S22+ look identical to one another, except for their sizes. The former has more compact dimensions due to the smaller display compared to the Plus model. In India, the Galaxy S22 and Galaxy S22+ are only available in Samsung’s basic colours such as white, black and green; not the dual-tone shades that are available in other regions. The front and rear glass panels also have a noticeably flatter design compared to their respective predecessors. One upgrade I’m happy to see is that the Galaxy S22 now has a glass back instead of plastic, just like the rest of the series.

The rear camera module looks like the one on the Galaxy S21 series, but does not merge with the frame of the phone like before. The frame is thicker too, giving the Galaxy S22 duo a more flattened and chiselled look compared to the rounded appearance of the Galaxy S21 (Review) series.

The rear camera modules may appear similar to those of the Galaxy S21 series but there have been some changes
Photo Credit: Sheldon Pinto

The volume rocker and power button of each phone are on the right, while the SIM card tray, primary microphone, USB Type-C port and primary speaker are placed on the bottom. The Samsung Galaxy S22 and Galaxy S22+ feature Dynamic AMOLED 2X displays with full-HD+ resolutions and up to 120Hz refresh rates. The displays have razor-thin bezels and holes at the top for the selfie cameras.

The rear camera sensors on the Samsung Galaxy S22 and Galaxy S22+ have received some changes compared to their predecessors. Both phones have a 50-megapixel primary camera and a 10-megapixel telephoto camera with 3X optical zoom. The 12-megapixel ultra-wide-angle camera and the 10-megapixel selfie camera on both phones appear to be the same as what last year’s models had.

The biggest change to all three Samsung Galaxy S22 models in India is that they pack Qualcomm silicon instead of Samsung’s Exynos SoCs, which is something many buyers have long hoped for. The Galaxy S22 and Galaxy S22+ both feature the Qualcomm Snapdragon 8 Gen 1 SoC. Both phones are available in two variants, with 8GB of RAM across the board. The Galaxy S22’s 128GB storage variant costs Rs. 72,999 in India and the 256GB variant costs Rs. 76,999. Similarly, the 128GB and 256GB storage variants of the Samsung Galaxy S22+ are priced at Rs. 84,999 and Rs. 88,999, respectively.

The Samsung Galaxy S22 and Galaxy S22+ might not look like they’ve gotten any big updates on the outside, but a lot has changed on the inside. Another thing that’s new is Samsung’s One UI 4.1, which is based on Android 12. However, the most exciting change, in my opinion, has to be Samsung’s big switch from its own Exynos hardware to Qualcomm. I still have plenty to test, both in terms of hardware performance and imaging, so stay tuned for my full review which will be out soon on Gadgets360.