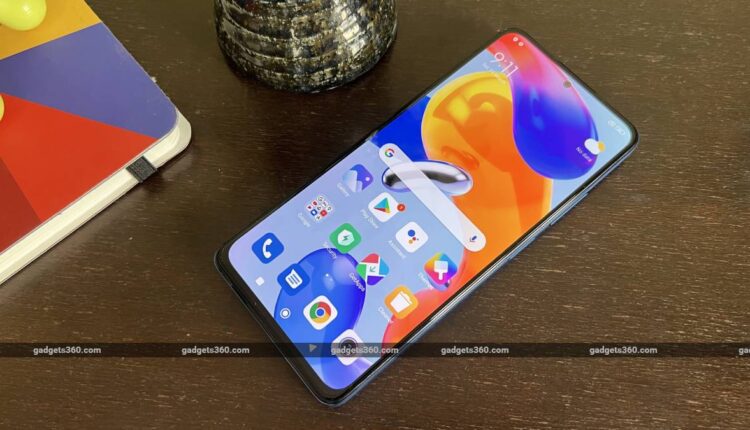 Xiaomi now has a huge portfolio of products in India, but each year’s Redmi Note Pro series refresh usually reminds us of how this company first started out – with smartphones that offered far better specifications than anyone expected for the price. The Redmi and Redmi Note series helped solidify Xiaomi’s position in India, targeting a generation of entry-level and aspirational buyers respectively. Now, with prices rising across the industry, we’ve stepped into a higher bracket of the market. Let’s see whether there’s still good value to be had, and whether fans will still be able to find what they’re looking for.

At first glance, the Redmi Note 11 Pro+ 5G looks quite plain and simple. The body is pretty rectangular with rounded corners and flat sides. The sculpted ‘Evol’ design of the previous generation has been succeeded by ‘Evol Pro’, but everything has been smoothened out to the point that nothing really stands out about this phone. We had a similar opinion of the recently launched Redmi Note 11S (Review). The front face is all black, and the shiny silver ring around the embedded front camera is the only way you’d know which end is the top and which is the bottom when this phone is lying flat on any surface. However, just like with last year’s models, I find it very distracting.

Flip this phone over and you’ll see where the design flair comes in. My Mirage Blue unit has an intriguing pattern of diagonal lines that look like waves on the surface of a pool when you tilt this phone under the light. I actually found it a bit hard to focus my eyes on the pattern, which is somehow applied beneath the extremely reflective rear panel. It certainly stands out, and in my brief time with this phone, I was pleasantly surprised to see the rear doesn’t pick up smudges easily. The other two options are Phantom White and Stealth Black, which both have plain, frosted textures.

The camera module in the upper left corner sticks out quite a bit, in a two-step design that makes the primary 108-megapixel camera look especially prominent. The power button on the right has an embedded fingerprint sensor even though it’s quite small, and the volume buttons are right above it. There are grilles for the earpiece speaker on the top, along with a 3.5mm audio socket and Xiaomi’s trademark IR emitter. On the bottom, you’ll find the primary speaker, USB Type-C port, and hybrid dual-SIM tray.

Weighing 202g, the Redmi Note 11 Pro+ is a bit heavier than average. It also isn’t the most comfortable to hold and use in one hand, thanks to its flat, boxy design. The body is said to have a splash-resistant nano-coating, and the SIM tray has a rubber seal to help prevent water ingress. A protective film comes adhered to the front.

On the inside, Xiaomi has gone with the Qualcomm Snapdragon 695 SoC which is relatively powerful and supports seven 5G bands. You get either 6GB or 8GB of LPDDR4X RAM and either 128GB or a whopping 256GB of UFS2.2 storage, which means you most likely won’t need to add a microSD card and sacrifice a second SIM. You get a 5000mAh battery and 67W fast charging, with the required charger and cable in the box. Xiaomi promises a “full day’s charge” in 15 minutes.

On the rear, there’s a 108-megapixel primary camera with a Samsung HM2 sensor and f/1.9 aperture and 6P lens, matching the specs of the Redmi Note 10 Pro Max. This phone also has an 8-megapixel f/2.2 ultra-wide-angle camera and 2-megapixel macro camera. The front camera has a 16-megapixel resolution and f/2.45 aperture.

Interestingly, the slightly more affordable Redmi Note 11 Pro uses MediaTek’s G96 SoC, and as its name reveals, does not support 5G. That’s a bold move for Xiaomi in this segment, especially since 5G networks might finally be available to end users in India later this year. The lower-priced sibling has the same display, battery, and charging features – it even has the same dimensions and weight. While it has the same front and rear cameras as the Redmi Note 11 Pro+, it actually has an additional 2-megapixel depth sensor. This is quite strange and we look forward to testing the portrait photo capabilities of both phones. The Redmi Note 11 Pro+ is also available with up to 256GB of storage while the Pro tops out at 128GB. Instead of the Mirage Blue finish, there’s a Star Blue option with a simpler gradient finish.

It does seem that the Redmi Note 11 Pro+ 5G is more future-proof than its near-identical sibling, but in terms of value for money, some people might still prefer to spend less and then upgrade a few years down the line. Xiaomi has tied up with HDFC to offer a discount of Rs. 1,000 to cardholders, and a new Redmi Loyalty Programme allows those with an older Redmi model to claim an exchange bonus. However, Xiaomi also says that due to current global geopolitical and supply chain issues, the prices announced are introductory, and are subject to change.

Do stay tuned to Gadgets 360 for a full review of the Redmi Note 10 Pro+, coming up very soon. We’ll cover its performance, camera quality, display, sound, battery life, charging speed, software, ease of use, and much more, to help you make a buying decision.

Elon Musk’s Cryptic Tweet Has Bitcoin Reference Hidden in Plain Sight, Can You See it?