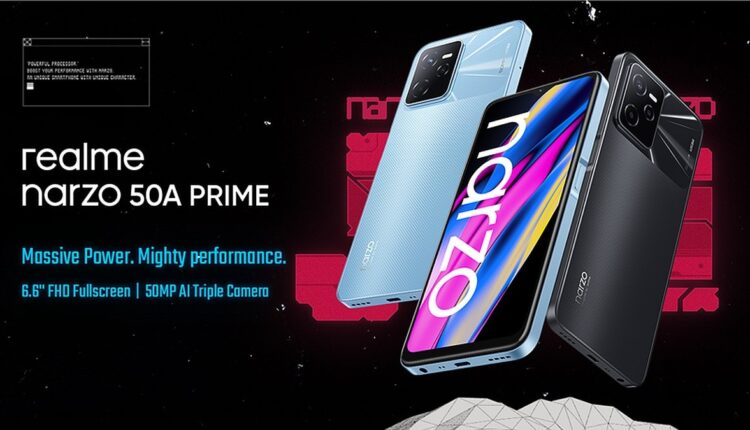 As per the images on the microsite, Realme Narzo 50A Prime will be offered in two colour options — Black and Blue. It is shown with a flat display with thin bezels on three sides and a slightly thicker chin. The display is also shown with a waterdrop-style notch for the selfie camera. The back is shown with a triple rear camera setup and a flash housed in a rectangular module.

Realme Narzo 50A Prime will get a flat frame with a fingerprint sensor embedded in the power button on the right, as per the images. The volume buttons are not visible in the images but can be safely assumed to be on the left spine, as is the case with most Realme smartphones. The left spine is also shown to house the SIM tray. The bottom of the smartphone will get a 3.5mm headphone jack, a USB Type-C port, and a speaker grille.

The microsite also shares some key specifications of the upcoming Realme Narzo 50A Prime. It will get a 6.6-inch full-HD display. The back will get a 50-megapixel AI primary camera. The microsite also mentions that the Narzo 50 series smartphone gets “massive power” signifying a big battery but without mentioning its exact capacity. However, as per a previous report, it will get a 4,890mAh battery with 18W charging support.