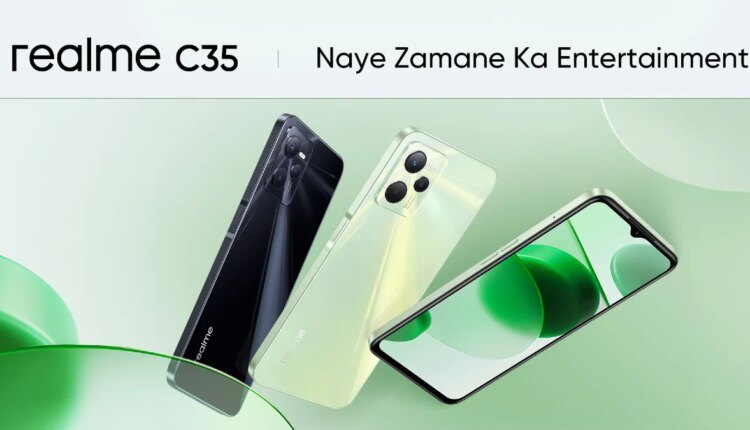 Realme C35 India launch date is set for March 7, the Chinese tech giant announced on Friday. The phone will come with a triple rear camera setup and a full-HD display with a waterdrop notch. There is also a Super Power Saving mode that will allow the users to get more hours from the handset when the battery is low. Realme has also revealed that the phone will come with 18W fast charging. Realme C35 was launched in Thailand last month.

As per an announcement from Realme, the Realme C35 will launch in India on March 7 at 12.30pm. The company also teased a few key specifications of the smartphone. It will come with a 6.6-inch full-HD (1,080×2,408 pixels) that offers a 90.7 percent screen-to-body ratio and 600 nits of peak brightness. Realme also teased a Super Power Saving mode that is claimed to extend the battery life of the phone, and 18W quick charging support. Furthermore, the phone will carry a side-mounted fingerprint sensor embedded in the power button.

While Realme hasn’t revealed Realme C35’s price in India, it was launched in Thailand at a starting price of THB 5,799 (roughly Rs. 13,350). The India price is expected to be in the same range.

There is no clarity on whether the Indian variant of the Realme C35 will be any different from the one that made its debut in Thailand. Key specifications revealed by Realme suggest that the Indian version is likely to be identical to the Thailand model. It is expected to run Realme UI R Edition based on Android 11, and is likely to get an octa-core Unisoc T616 SoC paired with up to 6GB of LPDDR4X RAM.

For photography, the Realme C35 will likely sport a triple rear camera setup. The Thailand variant gets a 50-megapixel primary sensor paired with an f/1.8 aperture 5P lens, a macro camera and a black-and-white portrait camera. For selfies and video calling, the Realme smartphone is likely to come with an 8-megapixel sensor paired with an f/2.0 aperture lens in India. Realme C35 could get up to 128GB of UFS 2.2 internal storage with an option to expand it to up to 1TB via a microSD card. Realme C35 should pack a 5,000mAh battery.