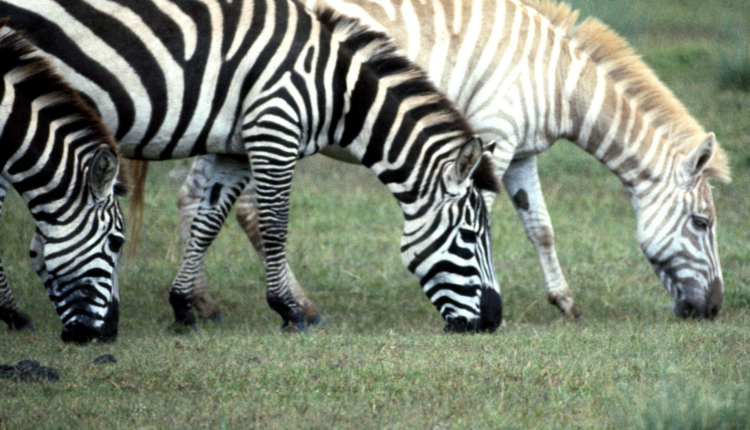 While animal videos go viral mainly because of their cuteness and free-spiritedness, here is one that is making news because it features a zebra that is unique to its kind. In Tanzania’s Serengeti National Park, a rare albino zebra has been discovered. The foal, named Ndasiata, is seen running around in a field without the black and white stripes that the species is known for, in a video posted to Instagram by the park. Although the foal’s neck, head, and torso have a few minor black and white stripes, the remaining body is covered in white fur. In the footage, Ndasiata can be seen in a field with another zebra.

The uncommon zebra, which is estimated to be eight months old, was sighted among a herd of zebra in the national park’s eastern section, as reported by The Daily Mail.

Scientists have proposed various theories to explain why zebras have stripes. According to one theory, the stripes produce an optical illusion that helps zebras hide from predators. Another notion is that the stripes aid in the animals’ body temperature regulation. According to a 2019 study, the stripes create an optical illusion for blood-sucking flies and other parasites, stopping them from attacking. Meanwhile, another theory proposes that the stripes are akin to human fingerprints, allowing one zebra to be distinguished from another.

Albinism is a condition in which cells fail to synthesise melanin, a pigment that gives skin, eyes, scales, and hair colour. This could be a problem because experts believe that the stripes on zebras help them hide from predators, and this medical issue puts Ndasiata at a disadvantage. However, the zebra appears to be doing pretty well in the park’s ideal surroundings. Almost all mammals can be born albino, and while reptiles, amphibians, and lesser vertebrates can also be albino, their bodies include other pigment cells, thus they may not appear white.