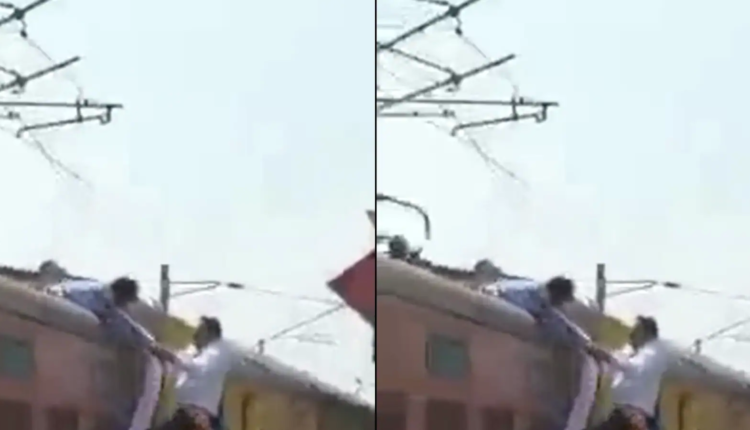 A railway employee crawls onto the train’s engine and throws a shawl at the boy in the 29-second video. (Credits: Twitter)

The life of a little boy who attempted suicide by climbing onto the roof of a train engine was rescued thanks to prompt response by railway staff. The Ministry of Railways released a video of the rescue effort. The incident occurred at the Bihar railway station of Danapur. A railway employee crawls onto the train’s engine and throws a shawl at the boy in the 29-second video. A high-voltage electric wire is spotted near the engine’s roof. He drags the man down from the train’s engine’s roof. The young man collapses onto the platform and appears to be unconscious. The youth is then covered with a towel as people around say that he needs to be taken to the hospital. Here is the post by the Ministry of Railways.

“Indian Railway staff show that they are a shining example of humanity and responsibility! East Central Railway ticket-checking employees at Danapur station saved a young guy who had attempted suicide on the train by risking his own life and transported him to the hospital,” the tweet read, translated from Hindi.

With 358 retweets and over 1600 likes in a day, the video went viral and the ticket checker earned accolades online for his brave endeavour. “Great work. He must be awarded for his bravery. Railwaymen usually do such work but are not counted. Salute you!! We are really proud of you,” commented a user.

Great work. He must be awarded for his bravery. Railway men usually do such work but are not counted. Salute you!!We are really proud of you. — SAJJAN KUMAR (@sajjan28151) March 9, 2022

Thanks Dear, God Bless you ever. Rly. Govt. should Sanction Award to the Concerned Rly Staff who has protected the life of frustrated youth. Wishing happiness ✨ in life of every Railway men.— ParmarShailesh Kumar (@ParmarS70109397) March 9, 2022

Another Railway employee recently received plaudits online he applied the brakes quickly to save a person who had slipped between the platform and the moving train. The Ministry of Railways also released a video of the incident, which occurred at the Surat railway station in Gujarat.

Several non-governmental organisations (NGOs) across the country are dedicated to the cause of mental health. For anyone in danger of committing suicide, they provide counselling and a suicide hotline. It is advisable to contact them if you suffer from poor mental health or know someone who does.