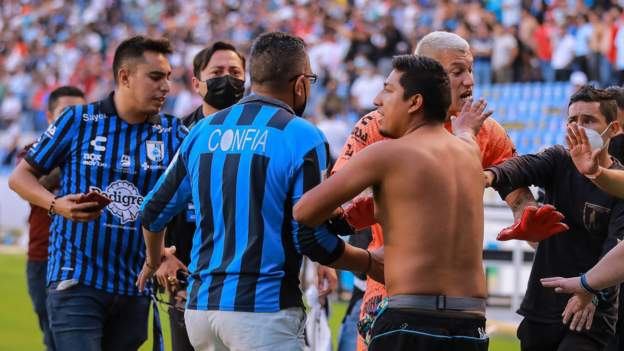 At least 22 people were injured when violence broke out among the crowd at a top-flight match in Mexico.

The Liga MX encounter between Queretaro and Atlas was abandoned after 63 minutes when fighting spilled on to the field at La Corregidora stadium.

Some players attempted to calm fans down before they were sent to the locker room.

Visitors Atlas led 1-0 when the match was suspended.

Liga MX president Mikel Arriola said all Sunday’s matches have been suspended “in solidarity with the people affected”.

“Those responsible for the lack of the security at the stadium will be exemplarily punished,” he wrote on Twitter.

“The safety of our players and fans is priority!”

Mariupol: Fires, no water, and bodies in the street