Popular Ukrainian Singer Takes up Arms Against Russian Soldiers, Sings While on Duty 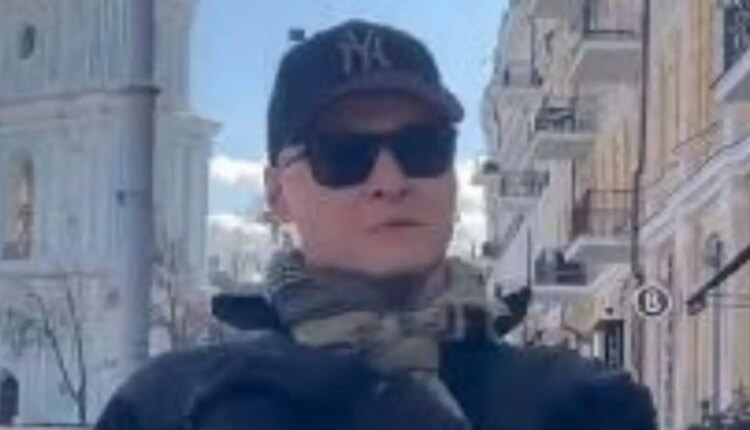 While Russia has drawn worldwide criticism for its brutal act of war against Ukraine, the people of the former soviet nation are being applauded for their undaunted spirit and determination to fight the aggressors. Reportedly, Andriy Khlyvnyuk, who is a prominent Ukrainian singer and is part of the Ukrainian music band Boombox, has decided to pick up weapons to defend his country rather than fleeing.

The 42-year-old singer, who enjoys entertaining thousand of Ukrainians through live concerts in various cities, volunteered to join the Ukrainian forces which have been vastly outnumbered by their invaders.

However, it seems like Andriy Khlyvnyuk cannot resist singing even in the face of adversity. A recent video uploaded by the Ukrainian defence ministry on their Twitter handle shows Andriy singing outside a church in Ukraine while wearing military gear.

“A little motivation from the leader of the group ‘Boombox’ Andriy Khlyvnyuk,” the ministry captioned the video. In the video, Andriy can be seen dressed up in a camouflage military uniform while also carrying a rifle. Standing outside a golden-domed church, Andriy soulfully sings for the camera in the 41-second clip.

Andriy’s spirit to entertain his fans even in an unprecedented situation won hearts online. The clip garnered more than 30,000 likes on Twitter along with nearly 4,600 retweets. Support for his battered country was evident in the comment section as Twitter users dropped hearts. “Jaysus. I don’t understand a word but I got goosebumps listening to this dude singing,” wrote one user while others too applauded him.

Jaysus. I don’t understand a word but I got goose bumps listening to this dude singing. Slava Ukraini 🌻🇺🇦— Ovidiu Suteu 🌻 (@ovidiu_suteu) February 28, 2022

Talking about his decision to join the Ukrainian forces, Andriy had told Euronews: “I’ll take my kids to safe house, to granny’s. And then I’ll return to follow the instructions of the government.” He had further said that if needed, he will also take up arms and fight for his country.

“Musicians are peacemakers,” Andriy said while also stating that currently, the situation was not to play guitars but to “take the rifles”. Expressing his anguish, Andriy said that “they bombed us”. Meanwhile, he also acknowledged the support that he has been getting since Ukraine’s invasion by Russia.

Many Ukrainians, especially women and children, have already fled to Poland, Romania and other countries to the west of Ukraine. However, men of fighting age have been asked to stay and defend their embattled country.

Notably, there are also a number of Ukrainians like Andriy who have shown extraordinary resilience to volunteer for the army.