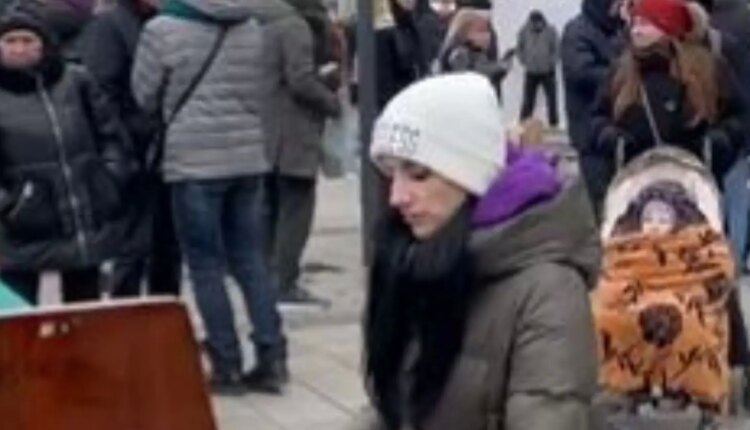 “It ain’t the world that’s so bad, but what we are doing to it. If lots more of us love each other, we’d solve lots more problems” – These were the words that Louis Armstrong uttered before making everybody groove to the tunes of the song What A Wonderful World. The song oozes positivity and instills the same into anybody who is listening to the track.

Amid the rising tensions, mass exoduses, and air raid sirens due to the war-turned-crisis between Russia and Ukraine, a pianist found a place right outside the Lviv Station to balance the atmosphere with soothing tunes of the song. A video of the pianist playing What A Wonderful World is going viral.

In the clip, the pianist is seen playing with the backdrop of people fleeing the place as Russia invades the Eastern parts of Ukraine. Catapulted to social media by a Reuters journalist, Andrew Marshall, the video is evidence of the calming contrast music can bring even in torn and tarnished places.

Sharing the video, Marshall, in the caption mentioned the location the clip was shot. The pianist performed right outside the Lviv Station, where refugees are seen fleeing war in Eastern Ukraine. “An accomplished pianist is playing ‘What a Wonderful World.’ It is hauntingly beautiful,” wrote Marshall.

Take a look at the video here:

The video has managed to amass more than 30 lakh views and lakhs of impressions in the form of likes, quotes, and retweets.

One user wrote, “And I dream of a world without war, to say ‘What a Wonderful World!’.”

Another user tried drawing parallels between the pianist in the clip and the 2002 war-themed movie, The Pianist.

According to this user, this song is remembered, whenever “the world needs change.”

Here are a few other reactions to the video.

As the invasion is taking ugly turns with each day passing, Russia has decided to hold fire and open a humanitarian corridor for citizens to safely evacuate the war-torn areas of Ukraine, including the recently attacked Kyiv and Kharkiv.