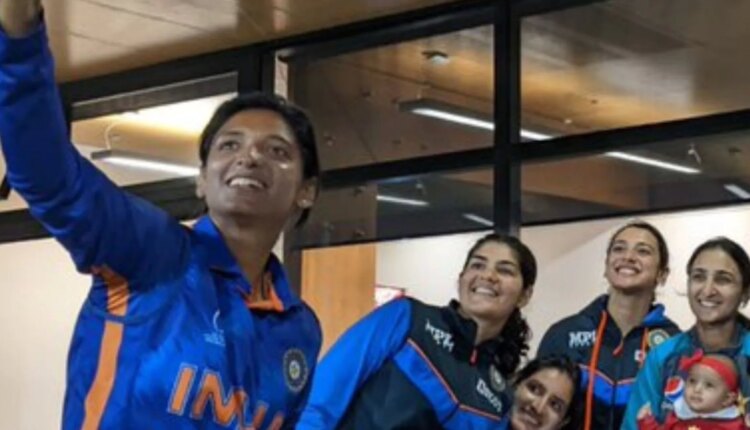 India beat Pakistan in the opening match of ICC Women’s World Cup 2022, but the photos of Indian players bonding with the daughter of Pakistani skipper Bismah Maroof is showing people that sports knows no borders.

The Indian women cricket team’s spectacular win against Pakistan in their opening match of the Women’s Cricket World Cup at Mount Maunganui has become the talk of Twitter town. However, it’s the photos of Indian players vibing with the baby of Pakistani skipper Bismah Maroof which have won all hearts. The International Cricket Council (ICC) tweeted a photo of the Indian team taking a selfie with the adorable baby and captioned it: “Little Fatima’s first lesson in the spirit of cricket from India and Pakistan.”

Since then, other photos and videos have emerged showing the Indian women playing with little Fatima. In one of the photos, batswoman Ekta Bisht can be seen spending some time with the baby at the pavilion.

“Sports has no boundaries. The video can make your day. Indian women team enjoying with Pakistani women cricket team captain and her baby.”

A fighting batting effort followed by a clinical bowling performance helped India thrash arch-rivals Pakistan by 107 runs in their opening match of the 2022 ICC Women’s World Cup at the Bay Oval, here on Sunday. With this win, the Indian women’s team maintained its unbeaten record against Pakistan. In the last edition of the 2017 Women’s World Cup, India lost to England narrowly in the final. And this time, India will be eager to go one step ahead and claim the title that has eluded them, especially for skipper Mithali Raj and veteran pacer Jhulan Goswami, who will be playing their last World Cup.