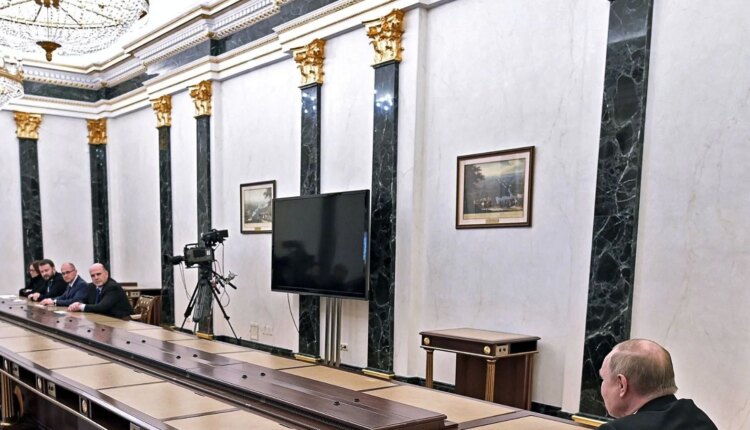 In the photo, the Russian president is seen sitting at a very long table.

As Russia intensifies its attack in Ukraine, a photo comparing Volodymyr Zelenskyy and Vladimir Putin’s leadership is going viral.

A photo that compares Russian and Ukrainian leadership through how the respective country heads meet others is going viral. In the first photo, Ukraine president Volodymyr Zelenskyy is seen in military uniform, laughing with soldiers and enjoying a meal with them. The second one shows Russian president Vladimir Putin at a meeting where he is sitting at the end of a very long table. A few men are seen sitting far from him.

“Putin hall looks so luxury, but control panel with large switches on the left side still looks like from past! Made in Russia!”

“That table picture is photoshopped; here’s the real one.”

“What is this? Nuclear bomb control?”

“Nothing says war-time crisis like having your own personal photographer in your bunker with you, capturing beautiful candidates with depth of field, then posting them to social.”

Nothing says war-time crisis like having your own personal photographer in your bunker with you, capturing beautiful candidates with depth of field, then posting them to social.— Viva Frei (@thevivafrei) March 1, 2022

The Russia-Ukraine crisis is not looking to deescalate as the Ukrainian army said that Russian airborne troops landed in the eastern Ukrainian city of Kharkiv on Wednesday. The city has been a target for Russian forces since President Vladimir Putin launched an invasion of Ukraine last Thursday. Meanwhile, US President Joe Biden said that the world has “isolated” Vladimir Putin for sending Russian forces into Ukraine and vowed that devastating sanctions would “sap” Russia’s economic strength and weaken its military. Russia warned residents in capital Kyiv to flee their homes on Tuesday and rained rockets down on the second city of Kharkiv, as Russian commanders who have failed to achieve a quick victory shifted their tactics to intensify the bombardment of Ukrainian cities. Russian President Vladimir Putin signs decree prohibiting Russians from leaving the country with more than $10,000 in foreign currency. The move comes after sanctions from US and allies over Russian invasion of Ukraine.