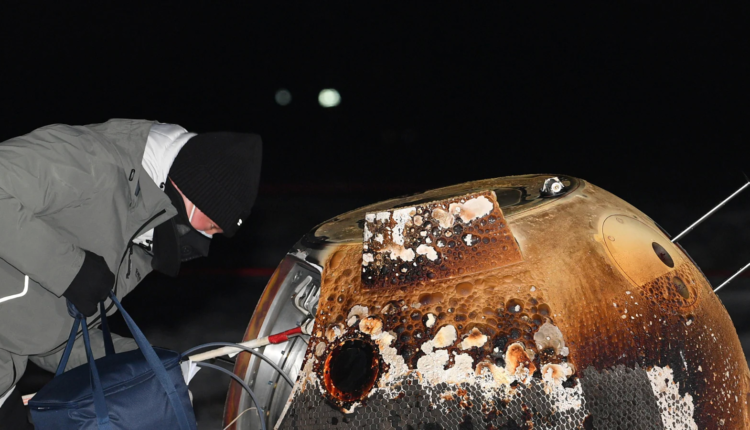 Scientists at NASA are tapping into one of the last unopened Apollo-era lunar samples to learn more about the Moon and prepare for a return to its surface. NASA’s Artemis mission aims to bring back cold and sealed samples from near the lunar South Pole. The sample is being opened at NASA’s Johnson Space Center in Houston and studied by the Apollo Next Generation Sample Analysis Program (ANGSA) — a science team which aims to learn more about the sample and the lunar surface in advance of the upcoming Artemis missions to the Moon’s South Pole.

“Understanding the geologic history and evolution of the Moon samples at the Apollo landing sites will help us prepare for the types of samples that may be encountered during Artemis,” Thomas Zurbuchen, associate administrator of NASA’s Science Mission Directorate in Washington, said in a statement.

When Apollo astronauts returned with these samples around 50 years ago, NASA had the foresight to keep some of them unopened and pristine.

The ANGSA 73001 sample is part of an Apollo 17 drive tube sample collected by astronauts Eugene Cernan and Harrison “Jack” Schmitt in December 1972.

The astronauts hammered a pair of connected 1.5-by-14-inch tubes into the lunar surface to collect segments of rocks and soil from a landslide deposit in the Moon’s Taurus-Littrow Valley.

The astronauts then individually sealed one drive tube under vacuum on the Moon before bringing them back to Earth; only two drive tubes were vacuum sealed on the Moon in this way, and this is the first to be opened.

The other half of this drive tube, 73002, was returned in an unsealed container, which was opened in 2019.

Now, scientists are focusing attention on the sealed, lower segment of the core – the 73001 sample.

It was carefully stored in a protective outer vacuum tube and in an atmosphere-controlled environment.A

The amount of gas expected to be present in this sealed Apollo sample is likely very low.

If scientists can carefully extract these gases, they can be analysed and identified using modern mass spectrometry technology.

The device being used to extract and collect the gas is called a manifold.

A team from the European Space Agency led a group in building the special tool to carefully pierce the container holding the lunar sample without letting any gas escape.

Together, they’ve created and rigorously tested a one-of-a-kind system to collect the extremely precious material – gas and solid – that is sealed inside the containers.

On February 11, the team began the careful, months-long process to remove the sample by first opening the outer protective tube and capturing any gas inside.

They knew what gases should be present inside the outer container and found everything was as expected.

The tube seemed to contain no lunar gas, indicating the seal on the inner sample tube was still likely intact.

On February 23, the team began the next step: a multi-week process of piercing the inner container and slowly gathering any lunar gases that are hopefully still inside.

After the gas extraction process is finished, the ARES team will prepare to carefully remove the soil and rocks from their container, likely later this spring.