Mumbai Man Selling Dosas on Cycle for 27 Years Goes Viral, Desis Queue Up for a Bite 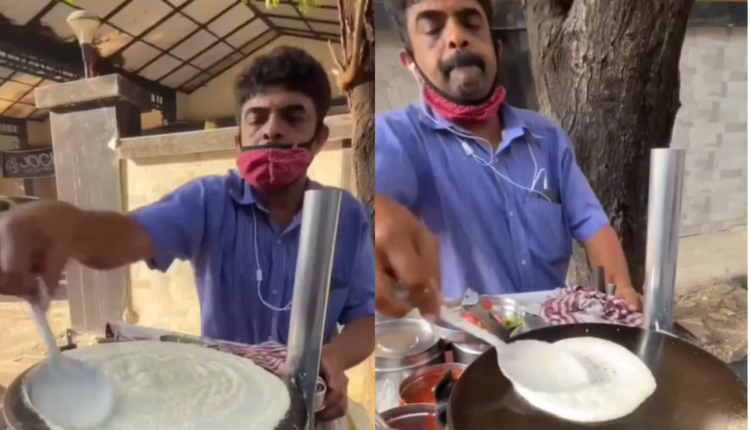 From big franchises to roadside shops, one can find varieties of dosa in India. However, have you ever had a dosa from a cyclewala? If not, then check out Srinivas Dosawala in Mumbai who has been selling different types of dosa on a cycle for the last 27 years. Isn’t it interesting?

Recently, a food page on Instagram shared the story of Srinivas’ movable restaurant. He has been making and selling more than 100 types of dosa just on a cycle. In the video posted by the page, we can see the man has a small setup of a gas stove, single tawa and lots of containers having different ingredients. The video shows Srinivas making a vegetable dosa at first and later, gives it a modern twist – a pizza dosa. All that in such a small place.

“Hard-working man selling various types of dosas on cycle for 27 years in the bylanes of Malad. He prepares this pizza dosa on a tawa with loads of veggies, schezwan sauce, garlic chutney, and oodles of cheese grated on top; all of which he carries along with him on a tiny cycle,” the caption for the video read.

The text on the video revealed the story of the man. Srinivas started his journey by selling plain and masala dosa only. As the time passed, he included various dosa to his list and now sells more than 100 varieties of the dish. The price of the dosa is quite nominal as masala dosa starts from Rs 35 and the cheesy pizza dosa is for only Rs 100. The man starts working at 8 in the morning and sells dosa till 9 pm.

Several users heaped praises on Srinivas with few recalling their college moments when they used to eat dosa from him. One of the users wrote, “[He] was the only reason I attended the college every day.” Another one said that he makes the best dosa. Various users wished him all the success in life.