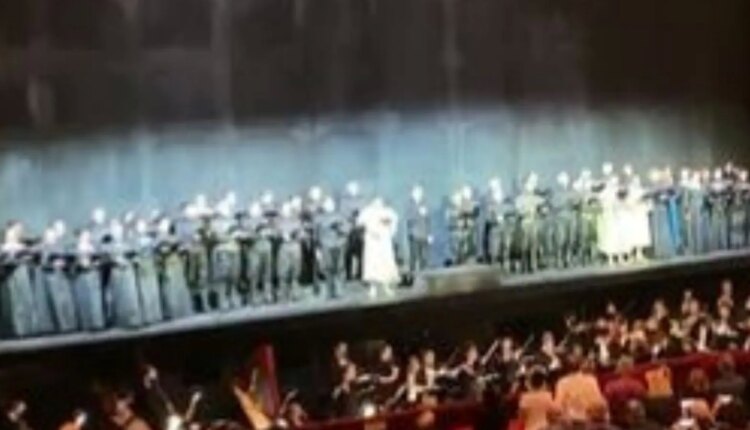 As more individuals and organisations are coming forward to show solidarity with Ukraine while the country is being ravaged by Russia’s attacks, the prestigious Metropolitan Opera in New York is the latest to join the bandwagon. Amid the Russia-Ukraine conflict, the opera on Monday began their opening night performance of Don Carlos by performing the Ukrainian national anthem to show support for the country’s war-torn citizens.

Ever since the video of the performance went viral on social media, it has drawn favourable comparisons with a legendary scene from the 1942 classic Casablanca where an actor sings the national anthem of France ‘La Marseillaise’ to drown out a German patriotic anthem.

The idea to start the day with the Ukrainian national anthem occurred to Peter Gelb, the opera company’s general manager, as soon as he woke up, reported NBC New York. One of the many members of the opera is 24-year-old Vlad Buialskiy who is worried sick about his family stranded back in Ukraine amidst the war. “I want to support my family and my nation as much as I can,” he told the news portal. “But I’m here in this difficult time because all my family and friends are there.”

The heartfelt act of the Metropolitan Opera was met with much warmth and appreciation from users who saw the viral video.

Reminds me of the scene from Casablanca when they sang La Marseillaise— Stretmediq 🇺🇸🇺🇦 (@stretmediq) March 1, 2022

Endless thanks for posting this— BCM (@bcmortimer) March 1, 2022

As confirmed by Gelb to NBC New York, the Met Opera has severed relations with all performers and staff members who support Vladimir Putin and will not be permitted to return until the conflict stops and compensation is made. The rest of the season will be dedicated to the “bravery of Ukrainian leadership, civilians, and artists.”

Prior to this, on February 27, the choir of Great St Bartholomew, London’s oldest church, sang Ukraine’s national anthem at the start of their service.

As the conflict between Ukraine and Russia worsens, a growing number of institutions are expressing their support for Ukrainian civilians trapped by the Russian invasion. Twitter announced to reduce the visibility of Russian state-sponsored tweets on social media. Meanwhile, Facebook has barred state-owned media from running advertisements on its platform.