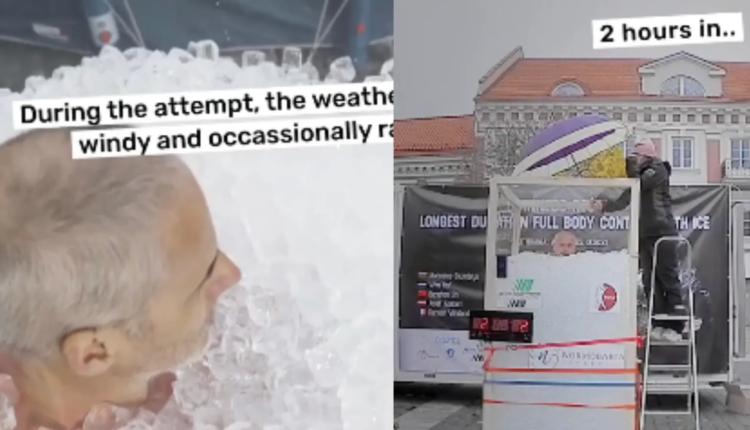 From pulling a double-decker bus in the fastest time to most pull-ups while hanging from a helicopter in one minute, we have come across innumerable world records by now. But recently a man from Poland created a record after sitting for over three hours inside the ice-filled box. Yes, you heard that right! A video, now going viral, shows Valerjan Romanovski from Poland sitting inside a box filled with ice to bag a record, and the attempt has left people surprised and intrigued.

Taking it to their official Instagram page, Guinness World Records (GWR) shared a 3 minutes clip, which shows how Romanovski sat in the ice-filled box to create the record despite the weather outside being 8 degrees and windy. The video also shows that the last record of the same attempt was of 2 hours, 35 minutes, and 33 seconds, but now the record for the longest duration of full-body contact with ice is 3 hours and 28 seconds, which was achieved by Romanovski.

While sharing the video, GWR wrote, “Bone-chilling ice endurance from Poland’s Valerjan Romanovski”. They ended the caption with several hashtags, including one that reads officially amazing. The video, which was posted 20 hours ago, has garnered more than 9k likes and has been viewed over 89k times. Not just this, but netizens flooded the comment section with their praising for Romanovski. One user commented, “Kudos”. Another wrote, “Now this is a record”. A third user commented, “Wow”, while there were others who dropped a handful of sock face emoticons.

Moreover, while talking about his record, Romanovski told GWR that he has been researching the capabilities of a human body for many years, and he believes that the potential of body and mind is greater than what we all assume. He also revealed that working on mind and body is his passion and it gives him great satisfaction. To clinch this world record, Romanovski spent half a year for training and has been dealing with cold for several years. “I trained in ice, in icy water, and in freezing air. In the house where I live, I bathe in cold water. In training, I spent up to 90 minutes in the ice,” Romanovski was quoted as saying by GWR. He also included treatments in a Normobaric chamber into his training plans, and he also slept in this chamber.

In addition, Romanovski described having a world record as a sign that he has mastered a given field. Not just this, but he dedicated each of his records to people suffering from cancer. Currently, Romanovski is the ambassador of the DKMS foundation which helps people with blood cancer.

Tencent to Reduce Transaction Fees on WeChat Payments for SMEs