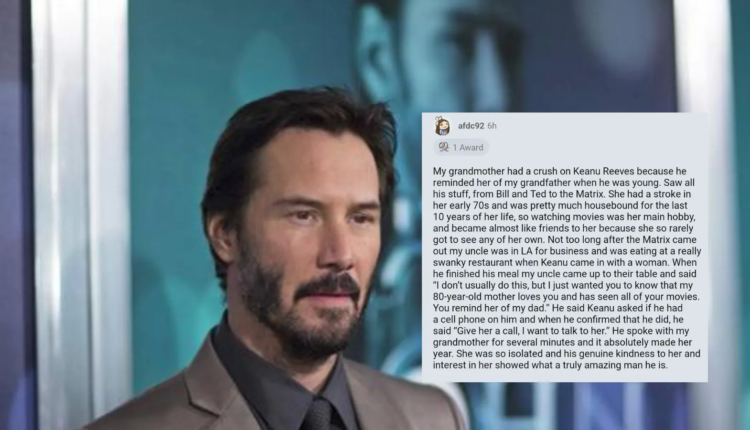 Keanu Reeves is the nicest and one of the most generous actors in Hollywood. There have been innumerable incidents to prove this in the past. Recently though, a new story emerged on Twitter through the official handle of Goodable. Goodable mentioned an incident told by a Reddit user about how Keanu Reeves once called her grandmother because she was a huge fan of the Matrix actor.

The user mentioned that her grandmother had seen every movie of Keanu’s from Bill and Ted to The Matrix. She had a stroke in her 70s due to which she was bedridden for the last 10 years, the user added. Shortly after the release of The Matrix, the Reddit user’s uncle came across the actor at a ‘swanky’ restaurant in Los Angeles while having his meal. As soon as the actor finished his meal, the user’s uncle walked up to him and explained how big a fan his mother was of the actor.

“I don’t usually do this, but I just wanted you to know that my 80-year-old mother loves you and has seen all of your movies. You remind her of my dad,” the user’s uncle told the actor. Keanu then asked the man if he had a cell phone on him. When the man confirmed that he did, Keanu asked him to call his mother. The actor said he wanted to talk to her. He proceeded to speak with his 80-year-old fan for several minutes. While highlighting how Keanu Reeves was so kind, the user said that it made their grandmother super happy.

This isn’t the first time Keanu has shown what an amazing human being he is. The actor once gave a tour of Bakersfield to his fellow plane passengers on a tour of Bakersfield while they were stranded in the city. In another incident, while he was on stage for a CyberPunk 2077 game promotion event, someone shouted from the crowd that Keanu was breathtaking. As reported by HuffPost, the actor replied to the person and the whole audience from the stage – “You’re breathtaking. You’re all breathtaking.”

Keanu Reeves will next be seen on the big screen in John Wick: Chapter 4. The movie will be released in theatres on March 24, 2023.