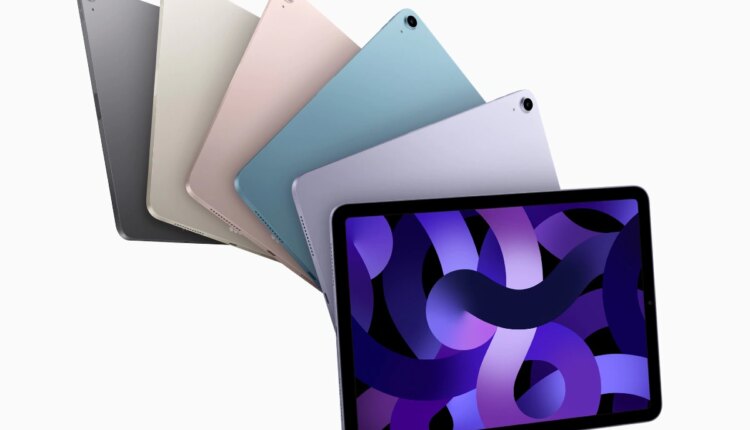 iPad Air (2022) was launched at the virtual Apple event on Tuesday (March 8) — alongside the much-anticipated iPhone SE (2022). The new iPad Air is powered by Apple’s M1 chip that is also already available on the iPad Pro models and is a part of the Mac computers as well. Alongside the new chip, the iPad Air (2022) includes an upgraded front-facing camera that supports Center Stage — the software feature that debuted on the iPad Pro and iPad mini last year. The fifth-generation iPad Air, though, carries the same design that was introduced on its last model in 2020.

The iPad Air (2022) comes in Blue, Space Grey, Starlight, Pink, and Purple colours and will go on sale in 29 countries including the US starting March 18. The new model will also go on pre-orders in India and other initial markets starting Friday, March 11.

The iPad Air (2022) runs on iPadOS 15. It features the same 10.9-inch LED-backlit Liquid Retina display that was introduced on the model introduced in 2020. The display comes with a peak brightness of up to 500 nits and carries P3 wide-colour gamut as well as True Tone white balance support. Further, the display also includes an anti-reflective coating on top. The new iPad Air also comes with Touch ID support that is integrated into the power/ standby button. Apple has equipped the iPad Air (2022) with the M1 chip. The company has, however, not revealed any RAM details — just like before.

The presence of the M1 chip is claimed to deliver up to 60 percent faster CPU performance and two times faster graphics performance over the previous iPad Air.

Apple has offered a 12-megapixel Wide rear camera on the iPad Air (2022) that is identical to what was available on the last model.

The iPad Air (2022) comes in 64GB and 256GB storage options. Connectivity options include 5G (optional), Wi-Fi 6, Bluetooth v5, GPS/ A-GPS, and a USB Type-C connector. Sensors on board include an ambient light sensor, barometer, and a three-axis accelerometer.

Apple has provided Apple Pencil (2nd generation) support on the new iPad Air to allow users to draw sketches while on-the-go. There is also support for Magic Keyboard to deliver a notebook-like computing experience, using a floating design and built-in trackpad on the detachable keyboard.

In terms of battery life, Apple claims that the iPad Air (2022) delivers an “all-day battery life”. Exact usage details are yet to be revealed, though.