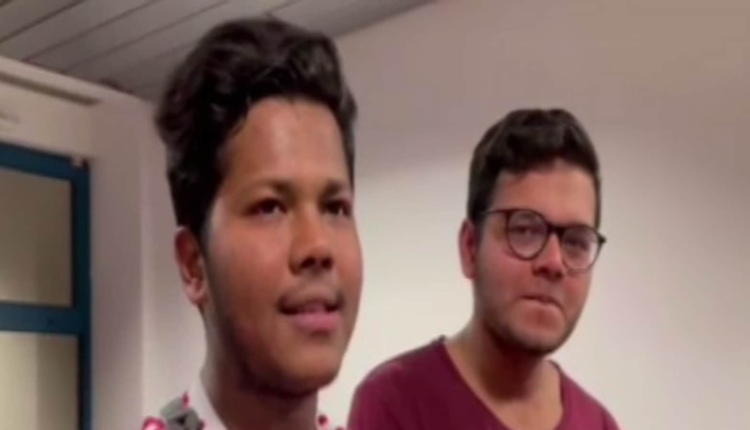 The Indian students bought spray paint off the markets to make the tricolour. (Photo: ANI)

Indian students arriving in Romania said that those hailing from Pakistan and Turkey were helped by the Indian national flag in crossing the various checkpoints in Ukraine.

Amid Russian invasion of Ukraine, as Indian students stranded in the besieged country are being evacuated, the Indian tricolour has come to the aid of Pakistani and Turkish nationals crossing into the neighbouring countries of Ukraine. Indian students arriving in Romania said that those hailing from Pakistan and Turkey were helped by the Indian national flag in crossing the various checkpoints in Ukraine, reports ANI. Indian students are being evacuated under special aircraft being flown under ‘Operation Ganga’. The special flights are being run by SpiceJet, Indigo and Air India. An Indian student who arrived from Odesa said that they had been told that they wouldn’t face any problems if they carried the Indian flag.

The Indian students bought spray paint off the markets to make the tricolour. One student narrated that they bough spray paint and curtains from the market, cut the latter into pieces and painted them with the colours of the Indian flag. The Pakistani and Turkish students also began to use the Indian flags to pass safely through the checkpoints.

The students from Odesa moved from Moldova to Romania and said that the citizens of Moldova treated them well, helping them out with accommodation and transport.

A C-17 Globemaster aircraft of the Indian Air Force left for Romania on Wednesday morning carrying humanitarian aid to Ukraine. The aircraft is expected to bring back Indians from Romania, who exited war-hit Ukraine through its border crossings. Officials said the aircraft left for Romania early morning. India on Tuesday sent the first tranche of humanitarian assistance comprising medicines and other relief materials to Ukraine via Poland. India had decided to send the relief supplies to Ukraine to help it deal with the humanitarian situation along its border areas with tens of thousands of people attempting to flee the Russian invasion.

Yesterday, Naveen Shekarappa Gyanagouda, India’s first tragic casualty in the ongoing military offensive in Ukraine, died when he stepped out of a bunker to fetch food, his relative said.