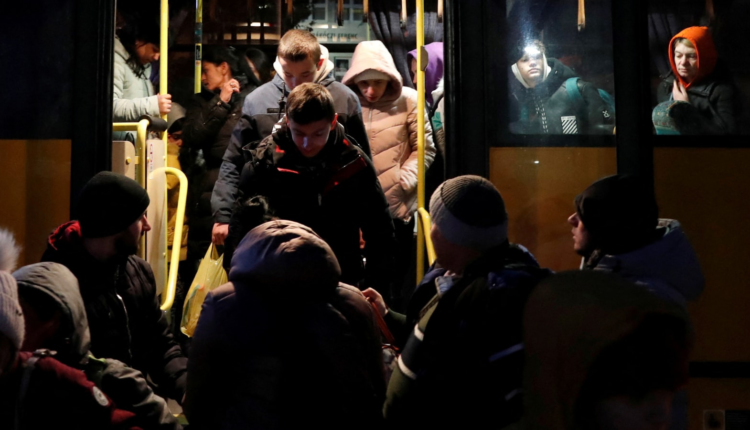 People from Ukraine get off a bus as they arrive at a refugee shelter in Hungary. (Representational photo: Reuters)

Saathiya restaurant owner Manish Dave said that the eatery has become a bomb shelter of sorts as it is situated in the basement of Chokolivs’kyi Boulevard.

An Indian eatery in Kyiv has turned into a shelter for Indian students as well as Ukrainian nationals amid Russian invasion. The Times of India reported that the owner has given shelter to at least 70 people since the attack began. “Saathiya” restaurant owner Manish Dave said that the restaurant has become a bomb shelter of sorts as it is situated in the basement of Chokolivs’kyi Boulevard. Ukrainian nationals have also been flocking to the restaurant in hope of shelter, Dave said, adding that he has been providing food for everyone. Before war broke out, Saathiya restaurant in Ukraine was a popular haunt among Indian students in the country.

An Indian student told Times of India on February 26 that the restaurant was “home away from home” for him in the strife-torn country. Earlier, he would go to the restaurant for Indian food. After the Russian invasion began, he got a call from Dave and immediately moved to Saathiya. Previously, he had been holed up at his hostel but tensions were mounting over how long civilian spaces such as that would be safe from air strikes.

A man called Manish Dave has turned his restaurant into a shelter for over 125 vulnerable people in Ukraine. He & his staff cook food & risk their lives in search of ration for them all. The world needs more people like Manish Dave. pic.twitter.com/ZnQlViwDoZ— GOOD (@good) February 27, 2022

One of the days, Dave provided chicken biryani to those sheltered at his restaurant. But there has been rising apprehension about how long the stocks of food would last. “We have been keeping stock of the ration left with us. We noow have rice and flour to last 4-5 days, but we need to buy vegetables and other items. There are restrictions on movement between 10 pm and 7 am,” Dave was quoted as saying. This was as of February 26.

Amid the Russia-Ukraine war, many civilians have stepped up in different ways. A Ukrainian brewery has switched from beer to Molotov cocktails, converting its bottling facilities into a petrol bomb factory churning out Molotov cocktails to be launched at Russian tanks. The Pravda brewery is located in Ukraine’s Lyiv city and it’s using beer bottles for the Molotovs. The bottles read “Putin Huilo” which translates to a slur attached with the Russian President’s name. The Molotov cocktails are being made for the use of Ukrainian self-defence militias, reports Telegraph UK. Juri Zastavniy, the manager of Pravda, said that given the war, not many are drinking beer at this point of time anyway. As per an AFP report, Zastavniy said that they have been making the Molotov cocktails because someone has to, apart from the fact that they have the skills to do so.