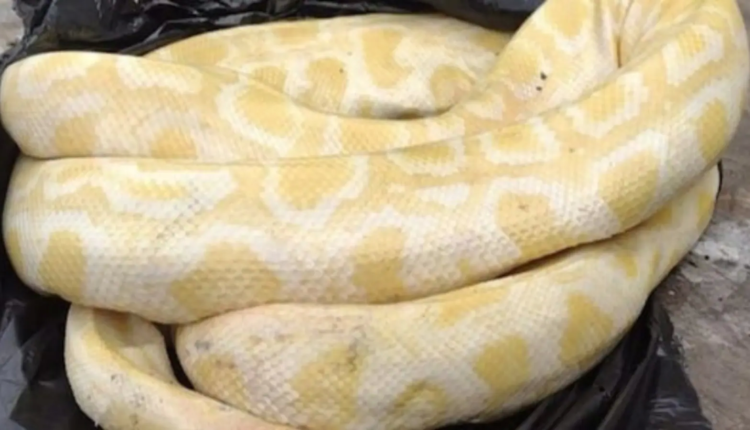 A team of street cleaners in East Lincolnshire, UK, was in for a shock when they discovered the body of a 10ft-long (3m) python dumped in a pile of black rubbish bags. It is being speculated that the snake was somebody’s pet, who dumped it in the dustbin instead of burying the body like people usually do. The story was originally published on the BBC’s website.

The reptile, which was thought to be an albino Burmese python, was discovered by the team when they were doing their rounds in Grimsby on Monday.

Council manager John Munson said that the discovery sent the team into “total shock” and none of the members of his team was able to “pluck up the courage to unravel” the dead reptile.

According to him, the animal, which “looks huge and weighs a fair bit”, was probably someone’s pet. However, they were unsure why it was discarded like this.

Mr Munson said: “Our job is full of surprises, but this was a total shock for our team.”

“You don’t turn up for work on a Monday morning expecting to find a massive snake dumped behind a hedge,” he added, expressing the kind of distress the employees were going through.

Authorities have said that they will launch a full-scale investigation into how the snake’s body was dumped on Thorold Street.

Councillor Ron Shepherd said: “Someone must know where it came from. We all have a legal obligation, or duty of care, to make sure our waste is disposed of correctly.”

Incidentally, the Burmese Python is one of the world’s biggest snakes and can grow up to 25ft (7.6m). It is a rare species of snake.