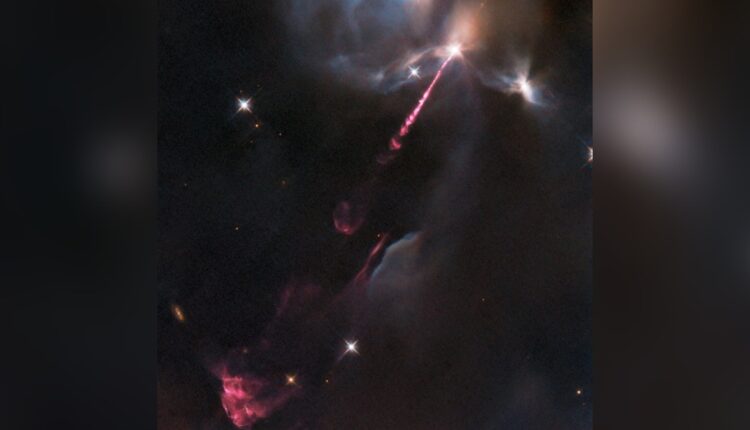 Hubble Space Telescope never lets us down when it comes to taking striking images of distant stars, full-fledged galaxies, and other stellar objects. Stunning us once again, the telescope has shared an image of a picturesque phenomenon occurring on a young star. What we see is a jet of gas like no other. NASA and the European Space Agency (ESA) have called it a “wispy structure”, which is typically called the Herbig-Haro object (HH34). ESA shared the photo on Twitter and wrote, “A NASA/ESA Hubble Space Telescope image of a jet of gas travelling at high speed from a very young star, resulting in a wispy structure known as a ‘Herbig-Haro’ object (HH34), seen at lower left.”

NASA added, “These objects can evolve significantly over just a few years.”

The Herbig-Haro object is too striking to miss. The photo shows a distinct streak of red and orange light emanating from a cloud of subtle blue and brown hues. The HH34 is seen in the lower-left corner of the object as a red dreamy glare of lights. The image is said to be taken from a set of observations of four nearby bright jets with the Wide Field Camera 3 of the Hubble telescope.

On its website, ESA stated that this phenomenon was an “energetic outburst from an infant star”. During the star’s earliest phase of formation, the “stellar tantrum” takes place. This consists of an “incandescent jet of gas” that travels at supersonic speeds through space.

The Herbig-Haro objects are formed when the jet of gas collides with the material surrounding the star at its formative stage. The shock of the collision heats up the material and causes the glow.

This isn’t the first time that this Herbig-Haro object has been observed. The Hubble previously captured it between 1994 and 2007, and again in 2015 with more detail. The archives suggest that the object has been evolving and changing significantly over the years.

According to the ESA website, “HH34 resides approximately 1,250 light-years from Earth in the Orion Nebula, a large region of star formation visible to the unaided eye. The Orion Nebula is one of the closest sites of widespread star formation to Earth, and as such has been pored over by astronomers in search of insights into how stars and planetary systems are born.”

The high-resolution images of HH34 and other jets taken by Hubble will aid astronomers in deciphering future observations made by the James Webb Space Telescope.