How to Identify Fake News on WhatsApp Using Fact-Checking Tiplines 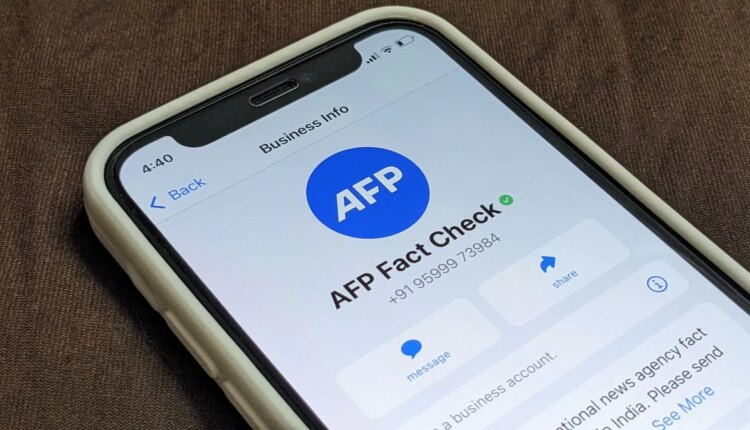 WhatsApp is often used for circulating fake news and misinformation. Although the instant messaging app is claiming to have implemented a list of features to restrict fake news circulation, WhatsApp users get misleading messages containing unverified information on a regular basis. It, thus, becomes important to know how you can verify the information you get on WhatsApp. It is also relevant especially in today’s time when state legislative assembly elections are going on and Ukraine is facing a deadly crisis due to Russia’s invasion.

As many as 10 fact-checking organisations in India have their tiplines available on WhatsApp to let users verify the information they receive. These tiplines are verified by International Fact-Checking Network (IFCN) and can be used for verifying potentially misleading content including photos, videos, and voice recordings. Most of them also support English and up to 11 Indian languages, including Bengali, Hindi, Marathi, and Punjabi, among others.

Fact-checking tiplines on WhatsApp in India

Below are the distinct fact-checking tiplines on WhatsApp that you can use to identify fake news and verify information.

In addition to the above tiplines, IFCN has its dedicated WhatsApp chatbot that helps users verify their information. It is claimed to connect users to independent fact-checkers in more than 70 countries around the globe.

How to use fact-checking tiplines on WhatsApp

Users need to save the numbers of the given fact-checking tiplines in their contacts or click on their links and then send them “Hi” on WhatsApp to get their information validated. Most of the listed fact-checking tiplines also give access to their latest fact-checked content when reaching them out on the messaging app. It is important to note that since the tiplines are essentially chatbots, they take some time to verify the information you feed.

What do different fact-checking tiplines in India offer on WhatsApp?

The prime purpose of the fact-checking tiplines on WhatsApp is to help users verify potentially misleading information they have received in the form of photos and videos as well as voice and text messages. Below are the details on how they work and can help verify information on the messaging app.

AFP: The AFP Fact Check tipline is designed to fact-check text messages, videos, and photographs. It supports both English and Hindi languages and can be used to subscribe to AFP’s newsletter and read Ukraine conflict-specific fact checks.

Boom: Similar to AFP, Boom FactCheck tipline supports English and Hindi languages. It also works with Bengali. Users have been provided with the options to verify the photos, videos, audio, and the text they have. It also gives access to subscribe to the Boom Newsletter and read the latest fact-checking stories from Boomlive.

Fact Crescendo: Unlike AFP and Boom, Fact Crescendo supports nine languages in total, including Bengali, English, Gujarati, Hindi, Marathi, Odia, and Tamil. It also lets users share their information in the form of text, photo, and video. In addition to verifying information from users, the tipline offers access to its fact-checking content and the latest updates pertaining to the COVID-19 spread.

Factly: Factly Fact Check allows users to submit their request for a fact-check about an article, video, and other content. Users can also subscribe to Factly’s newsletter for a daily dose of fact-checking content or get the latest fact-checks from the website. However, it doesn’t support local languages and can only work in English.

Newschecker: Newschecker works with a listing of nine languages in total, including English, Gujarati, Hindi, Marathi, Punjabi, and Urdu. It lets users share their suspicious messages, photos, and videos, as well as subscribe to the daily newsletters by the website.

Newsmobile: Just like the other fact-checking tiplines, Newsmobile lets users search for fact checks and look at the latest fact-checks. It also provides tips to fight misinformation.

Quint WebQoof: Quint’s WebQoof also works similar to the other tiplines, and it supports both English and Hindi languages. It also lets users subscribe to the WebQoof newsletter.

Gadgets 360 briefly tested all the different tiplines available on WhatsApp in India to determine how useful they could be in identifying fake news and verifying information.

We used two tweets carrying old videos, a tweet carrying an old image, and imagery containing false text. All the content was related to recent events, but had been proven to be false or misleading by verifiable sources. The tiplines from Factly, India Today, Quint WebQoof, and Newsmobile were able to respond to the imagery we shared, while others didn’t respond despite waiting for a couple of hours. Factly and Quint WebQoof were also able to verify the tweet links we shared were false. However, other tiplines were not able to verify the tweet links we shared until the time of publishing this article.

It is likely that the fact-checkers may take some time to respond to users due to the number of queries they get.

Gadgets 360 will update this article when the tiplines will respond with details for clarity of our readers.