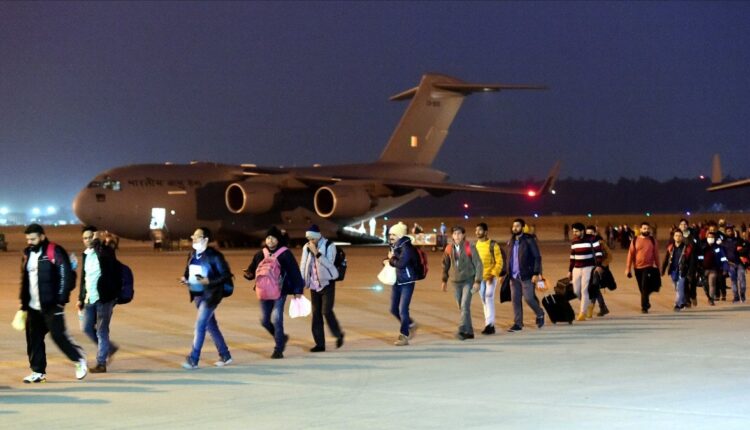 A video of students stranded in the war-hit Ukrainian city of Sumy holding Indian flags and threatening to take up a journey to the Russian border on foot created an uproar in national and international media, which in turn, prompted the Indian authorities to fast-track their evacuation process.
Cut to Wednesday, all the stranded students have been evacuated from the northeastern Ukrainian city.

The incident provides an apt example of how social media helped people stuck in the ongoing war involving Russia and Ukraine.

Ever since a Russian offensive began in Ukraine, social media platforms have been flooded with videos and photos by those stranded in the east European country, soldiers and even politicians.

Jisna Jiji (25), a medical student who was among a group of around 700 Indian students that decided to take up the journey to the border on foot, said social media played an important role in their evacuation.

“We were requesting authorities to evacuate us as soon as our resources started depleting and there was continuous shelling, but the requests fell on deaf ears. Frustrated by no response, we decided to post a video on social media. It went viral and within hours, we got a response from the government and now, we are being evacuated,” she said.

Mobile phones in hand, soldiers and civilians are documenting the war as it unfolds.

Medical student Aousaf Hussain (25), a native of Kerala, was stuck in a metro bunker with his friends. Their resources were depleting fast and there was no sign of help coming.

So he decided to use his Instagram page, which is followed by a few thousand people, to document the day-to-day struggles in the bunker. He posted several videos, narrating sordid tales and showing buildings damaged due to continuous shelling and bombings.

In several of the videos, he detailed their life in the bunkers, describing what kind of problems they were facing and how they were arranging drinking water and food for survival.

Talking to PTI, Hussain said he started documenting his life in the bunker so that people could see the videos and come forward with help.

“When the war started, there was no one to help us. So we started to record the videos so that the people who saw those could help us. It was as if we were forgotten. Nobody was asking about us,” he said.

Hussain said sharing the videos on social media platforms helped make people aware of the issues they were facing.

In the age of social media, mobile phones allow people to witness the horrors of a war live sitting thousands of miles away. It also helps the families of those stuck in the war zone to get updates on the ground situation.

“It helped us keep our parents updated as there was a lot of fake news doing the rounds. We presented the truth via social media,” Hussain said.

Moreover, social media helped people coordinate among themselves during the evacuation.

For Seemesh Sasidharan, a student coordinator, it was difficult to manage a group of 800 Indian students stranded in Kyiv. However, with the help of a Telegram group, he was able to convey and forward the necessary information to the group. It helped him keep track of the students.

“Bombing was going on everywhere and there were 800 students with me. We divided them in groups of 40-50 with two senior students managing each group. The students were scattered as there were four routes of evacuation.

“The internet helped us coordinate among the students. We told them which route to take and where not to go. We made a Telegram group of the 800 people and I kept informing them about the train timings,” Sasidharan said.

The social media platforms also helped the students raise their issues with the embassy.

“With the help of social media, we raised complaints that the embassy was not active and they became active. I was in touch with the embassy via social media. Social media helped us to apprise the world of the situation,” Sasidharan said.

Kanishk, a first-year medical student who safely reached India last week, said those who had escaped Ukraine before them helped them through social media to find escape routes.

“We used a WhatsApp group to coordinate among ourselves. All the news regarding the evacuation and the updates of the Indian embassy were forwarded to the group. During the evacuation too, we were asked to reach the border ourselves, so the students who had already escaped helped us by providing the contact details of drivers and routes,” he said.

Not only civilians, Ukrainian officials, including President Volodymyr Zelenskyy, are using social media to dismiss the Russian media’s propaganda. Zelenskyy posted several videos showing him with other government officials and said Ukrainian leaders had not fled Kyiv as Russian forces entered the capital.

However, there were other sides of social media that the students had to face — trolling and fake news.

“We were trolled badly as people sitting thousands of miles away were abusing us for choosing to study abroad,” Hussain said.

In the fast-evolving situation of a war, it is quite difficult to separate fake news from real news.

“There was fake news all over the internet and as we were already panicking, it added to the anxiety,” Hussain said.