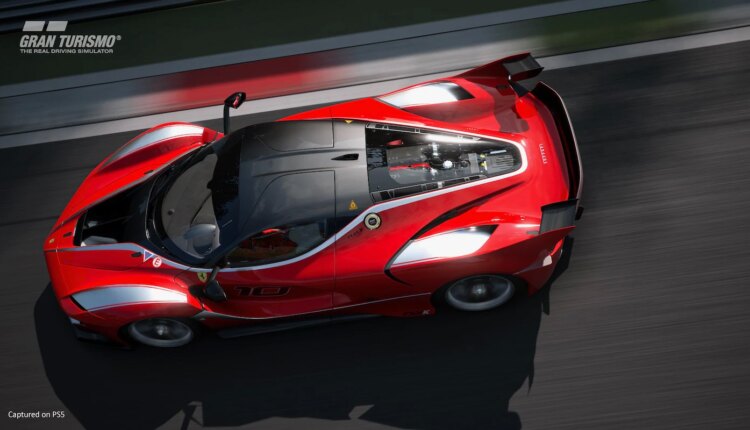 Gran Turismo 7, out Friday on PS4 and PS5, is a little staid. There’s nothing wrong with its cars, how they drive, or how the game looks. You would expect that from the veterans at Polyphony Digital — the Sony-owned developer has made every entry in the 25-year-old Gran Turismo simulation racing game series, with the franchise present on every mainline PlayStation console generation — who spent roughly three years actively developing Gran Turismo 7. But it feels antiquated in some ways, lacking the flair and personality of modern racing titles.

For one — it might feel counterintuitive to say this, but it’s not — the soundtrack isn’t anything special. Gran Turismo 7 could’ve learnt from the best racing game in recent memory, Forza Horizon 5, which understands how crucial music is to the experience of racing in games. Firstly, the series developers Playground Games put a lot of work and thought into the tracks they pick and its radio stations, with radio jockeys weaving in and between tracks to supply commentary and make its world feel alive. Plus, Forza Horizon has always known how to work with music, editing and splicing it together to play the best parts at the biggest moments.

Gran Turismo 7 is lacking all that. Most of its chosen tracks are boring or uninspired, Polyphony Digital doesn’t do anything to spice things up, and there is no voiceover here. Everything is communicated via written text in Gran Turismo 7 — which means you have to do a lot of reading. (Gran Turismo 7 is also full of white people as NPCs, despite being made by a Tokyo-headquartered studio. It tells you who the game is targeted towards, but it feels weird to mask the developers like this.) Music is also part of Gran Turismo 7’s newest game mode, Music Rally, where you drive to the beat of music — but I didn’t enjoy it at all.

All You Need to Know About Gran Turismo 7, the New PlayStation Exclusive

On the racetrack, Gran Turismo 7 delivers as a serious racer. It demands you to pay attention to the basics — racing line, timely braking, the right tyres, and most efficient turning — if you are going to become good. But you can’t control every variable, it’s unpredictable at times. Dynamic weather can really upend your race in Gran Turismo 7. Having started with stock tires once, I was smooth sailing for two-thirds of the race before a quick shower ground the race to a halt. From being very close to 1st, I eventually ended up outside the podium, which in turn lost me the championship by a lone point.

And in a few places, Gran Turismo 7 feels like it’s caught between pure sim and semi-arcade. For one, there’s an expensive nitro system that you can buy and equip to any car. More importantly, brakes in Gran Turismo 7 have a tendency to lock and make your car swerve widely at times, in what can only be described as very Hollywood ways.

Like Wheelspin in Forza Horizon games, Gran Turismo 7 offers “Roulette” tickets that can win you cars, parts, or credits. They come in different levels — one star, two stars, and so forth — with higher ones sporting higher rewards naturally. But they don’t tend to be very rewarding unlike Horizon, with the game largely sticking you with the lowest possible reward.

That’s usually a few thousand credits — this is what you get after winning races, and what you use to buy cars and upgrades. Gran Turismo 7 also allows you to top up credits via the PlayStation Store. For a game that costs Rs. 4,999, this seems egregious at best — and pay to win at worst.

This unpredictability and arcade nature can be frustrating — a single freak shower or one poorly-applied brake can kill your race at times. (That said, dynamic weather can also be a gamechanger.) And moreover, as you push deeper into Gran Turismo 7’s single-player campaign, races get longer and longer. You start out with two-lap races and will end up with four-lap races in less than 10 hours. Gran Turismo 7 is essentially testing player endurance. But this gets mundane pretty soon for two reasons. Polyphony Digital might be promising 97 layouts across 34 locations, but I grew tired of them — Gran Turismo 7 doesn’t introduce new types of races, cars, and tracks quickly enough.

On top of that, the AI bots even at their hardest never really challenged me. (The time trials put up a much better fight.) This despite them getting a head start, sometimes as much as 26 seconds, thanks to Gran Turismo 7’s application of a rolling start. And unless you’re trying to make the AI competitive, there’s no point in raising difficulty as Gran Turismo 7 doesn’t offer higher rewards for racing tougher opponents. Both those facets made me think that like its predecessor, Gran Turismo 7 seems designed for online play. Sony might have moved away from the esports-first mentality — the previous entry, Gran Turismo Sport, was even missing a single-player mode at launch — but here, it’s still pushing players who crave competition to the game’s multiplayer modes.

From Gran Turismo 7 to Grand Theft Auto V, 12 Games to Play in March

Speaking of, there are three ways to play against others on Gran Turismo 7. Like other entries in the series, the newest Gran Turismo game offers local 2-player split screen action. I wouldn’t recommend it though, since it offers a limiting letterboxed experience with mighty black bars on top and bottom. It’s better to play over the Internet — online multiplayer — where you can pick the tracks you like, decide the regulations, and invite your friends or open it up to the public.

And then there’s Sport mode — not to be confused with the aforementioned Gran Turismo Sport the game — where you can take part in online races curated and scheduled by the devs. Naturally, these are only available at particular times during the day, though unfortunately, there’s no option to set an in-game reminder. You must do that externally. Up to 20 players can be involved at a time — so if you want a better starting spot, you can play qualifying races during a pre-race window.

Gran Turismo 7’s Sport mode is meant to be a more casual undertaking, though because this is a sim title, it gives you guidelines on how to behave online. No pushing, shoving, or colliding with other cars, and no overtaking and braking hard in front of other cars. Basically, you shouldn’t be doing anything unethical to gain an advantage. But Polyphony’s system needs more refinement, because in the races I played, it failed to recognise legitimate tail fishing incidents.

There’s plenty to prepare you for Gran Turismo 7’s online multiplayer. The awfully-named Licence Centre — you’ll need to gain new licence levels to take part in bigger campaign events — is basically an advanced tutorial section, which starts you off by teaching you braking (identify landmarks) and goes on to do a lot more. The licence centre is clearly designed to make you a better racer, and slowly loosen the tethers and shed off driver assistances you may have put on yourself. With Circuit Experience — think of it as practice day in Formula 1 — you can go around the track (section wise or the full thing) and time yourself. Gran Turismo 7 also offers Demonstrations, where you can see how the AI would best navigate a track or a portion of it.

From Starfield to God of War Ragnarök, 45 Most Anticipated Games of 2022

There are over 400 cars in Gran Turismo 7 that you can check out at Brand Central, where you will also receive time-limited invites now and then that allow you to buy certain very expensive cars.

There’s also an in-game mall where car manufacturers can advertise themselves, with YouTube videos plugged in for extra effort. Cough product placement cough.

All of these elements are introduced as you play through the single-player campaign — with Gran Turismo 7 nicely guiding you through new events, championships, and other race formats. Chief among these is the use of the “Menu Book” system at the in-game Cafe, whose owner Luca assigns you objectives that will mostly help you unlock new cars. Each Menu Book in Gran Turismo 7 has a theme, be it American muscle or hot hatches, BMW or Alfa Romeo from Europe, or simply to introduce a new game feature. This could be Missions which consist of short track activities where you’ve to hit a certain objective within a time limit to get gold, silver, or bronze. Every Mission — they are divided into locales — ends with a full race as the final objective.

Every game mode in Gran Turismo 7 save one requires you to be connected to the Internet — you will get kicked you out in the middle of races if you go offline, which can be very frustrating — which Polyphony justifies has been done to prevent hacking and cheating. Only the Arcade mode works fully offline.

When you are not spending your time racing in Gran Turismo 7, you should check out the game’s vast photo mode dubbed Scapes. It’s a new take on photo mode as it lets you place cars you own — yes, more than one at a time — in some of the most gorgeous and/or well-known spots around the world. (There are no Indian locations here sadly.) Scapes offers for extensive customisation on how you want the cars to be placed, the lensing, the framing, the camera settings, extra effects, and lots more to dive into. It will delight virtual photographers — and make them lose sense of time.

Scapes is also where Gran Turismo 7 looks its best, if you’ve picked the right mode. On the PlayStation 5, the game lets you pick between two: Prioritise Frame Rate vs Prioritise Ray Tracing. The former targets 60fps throughout the game, while the latter naturally utilises PS5’s raytracing capabilities. That said, raytracing is not available in races at all, it only turns on when you leave the track. During races, Gran Turismo 7 looks great but I’ve to admit it never wowed me like Forza Horizon 5 did — and I played that on the Xbox One X — with its use of water droplets, car dirt, and all sorts of tiny things that embellish the game.

If you’re playing on the PS5, Gran Turismo 7 does make use of the DualSense’s new features obviously, with the haptic motors and adaptive triggers most in play when you’re off track and braking, respectively. Although I’m very afraid whenever a game pushes too much with the DualSense, given Sony’s reliability issues with the springs in the adaptive triggers (aside from the drift troubles with the analogue sticks).

Gran Turismo 7 is not lacking in effort or attention to detail. In a recent tweet, Polyphony revealed that cars in the first ever Gran Turismo game on the first PlayStation were made up of 300 polygons. What’s that number 25 years later in Gran Turismo 7 on the PlayStation 5? Half a million. That’s crazy. (It also shows how powerful gaming hardware has become in two and a half decades.)

For those looking for a dedicated simulation racer where you can spend hours tuning and practising to get the best out of the car and yourself, Gran Turismo 7 will no doubt appeal. But I don’t think it’s for racing game enthusiasts, it’s for racing enthusiasts.

A great racing game is more than the details — it’s the whole package, it’s how it makes you feel. And Gran Turismo 7 isn’t the kind of game that makes me want to pick up my DualSense controller and boot it up as I wrap this review. I’m happy to be called elsewhere.