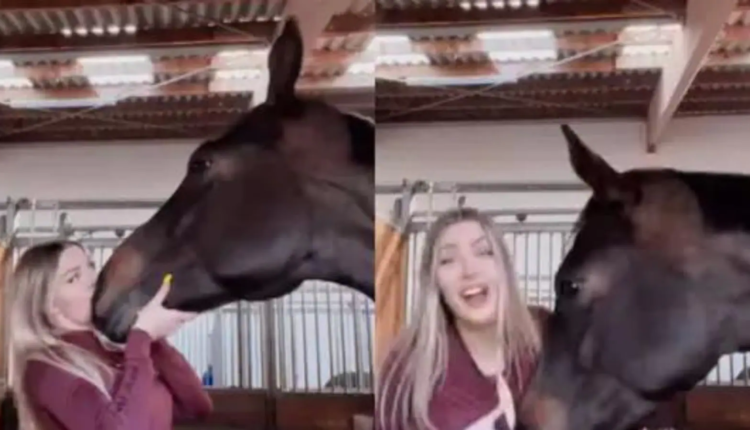 The Instagram users also said that they found the video, “hilarious,” “amusing” and “interesting”.

She found the video so funny that she posted it on social media sites.

A model and social media influencer was caught in an awkward situation after her horse pulled her top open while they were shooting an Instagram trend. German model Augustine, who has more than 1.8 million TikTok followers, recently posted a video with her horse. She was lovingly petting her horse in the stable when something unexpected happened that went viral on social media sites.

In the video that has gone viral now with over 10 million views on TikTok, Augustine wore a skin-tight grey gym wear set. A zipper ran down the front of her top. She was having a good time with the farm animal. Within moments, the horse made eye contact with the zipper on Augustine’s top and pulled it down from her neck. This happened all of a sudden. From the video, it seems that Augustine was not expecting that to happen.

She giggled as she tried to protect her modesty. She found the video so funny that she posted it on social media sites. Augustine has also shared the video on Instagram. Sharing the video, she captioned it, “Well that escalated quickly.”

The video has garnered over 68,000 likes and over 38 lakh views. Netizens are commenting on the video. One Instagram user wrote that the friendship of the horse and its owner is looking very sweet. Another said that the video looks like a planned but despite that, it is very cute.

The Instagram users also said that they found the video, “hilarious,” “amusing” and “interesting”. Many called the horse a “mischievous animal.”