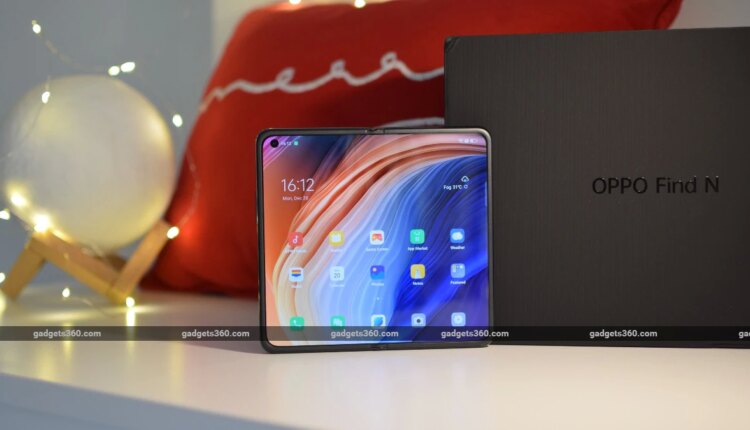 The “snap!” of a shutting phone is the nostalgic sound resonating from the giant stands of Samsung, Oppo and Huawei at the Mobile World Congress in Barcelona this week.

Star of the early 2000s, the flip-phone is making a comeback, with the big names of the industry hoping the high-tech new version — the foldable smartphone — is on the verge of going mainstream.

As production costs start to fall, analysts expect a tenfold increase in sales by 2026.

Samsung has been the pioneer in the sector, presenting the first foldable smartphone at the Barcelona conference three years ago.

It vows that its latest models — the Galaxy Fold and Galaxy Z Flip — will give users the sort of experience normally reserved for tablets and laptops.

Samsung Galaxy Fold was the first foldable smartphone from Samsung

“We are working with players like Disney+ and YouTube to best integrate their applications into this screen size and make maximum use of all the possibilities of the product,” said Francois Hernandez of Samsung France.

But competition is rising, with companies like China’s Oppo muscling in.

Its Find N, currently available only in Asia, has seen “really hot” sales in China, according to the company’s head of products Arne Herkelmann.

The foldable phone “is ready for the mass market,” she told AFP.

“We see that it is becoming more and more mature as a technology and also reaching more approachable prices, so definitely in the future, you will see more foldable devices.”

Samsung Galaxy Z Flip is smaller than most smartphones when folded

It has not just been the technical challenge of creating a bendable screen that has held back the market.

It has also been hard to disrupt the fundamental image — seemingly set in stone with the first iPhone in 2007 — of a smartphone as a large black rectangle with a single touch screen.

They remain a niche segment with a market share of just 0.62 percent in 2021, according to Ritesh Bendre, analyst at Counterpoint Research.

But with Huawei (and its P50 Pocket), Xiaomi, Motorola, and even Google working on their own models, that share is expected to reach 3.5 percent by 2025, he said.

A key turning point is expected when Apple joins the fray, which analysts expect to see around 2025.

“Apple is a hugely influential company,” said Bendre, estimating that foldable sales would surpass 60 million when it gets involved.

“This will add further credibility and help open up the foldable market to iPhone customers. Volumes will depend on whether Apple is aiming for a more expensive or cheaper type of foldable,” added DSCC’s Ross Young.

But in the upcoming battle of the foldable, Samsung already has the jump on its competitors, especially in the technologies necessary for its production.

“Samsung is taking advantage of Apple’s lack of participation and Huawei’s difficulties” linked to US sanctions, said Young.

“It sees foldable screens as a way to improve its flagship position against Apple and other brands.”