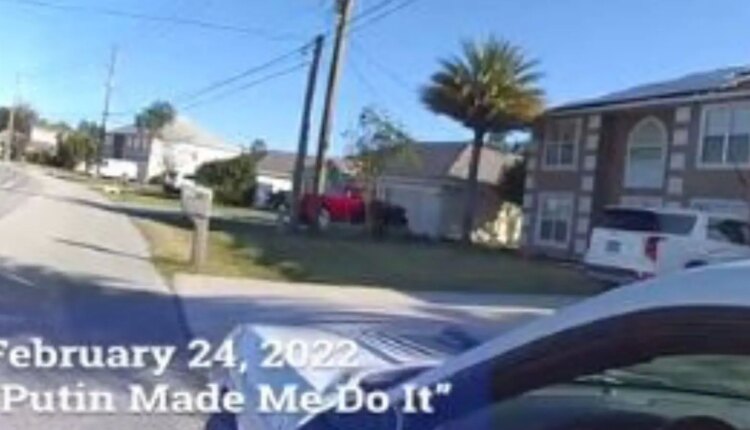 A man from Florida, US, was caught speeding but when confronted, he blamed Russia and President Vladimir Putin for his act. The video of him arguing with the police officer was posted on Flagler County Sheriff’s Office Facebook page on Tuesday. While the bodycam footage was posted on the page on March 1, it was dated February 24, 2022, the same day Putin declared an all-out war against Ukraine.

Reports suggest that the driver was pulled over by the police for allegedly running a stop sign and speeding at 50 mph (miles per hour) in a 30 mph zone. When officers asked him the reason for it, he said he was rushing home to find out more about the war and Russia’s invasion of Ukraine and claimed that Putin ordered a potential nuclear strike.

The unidentified person was heard saying in the video that he was rushing home as Putin had ordered a potential nuclear strike on Ukraine. “I’m freaking out here, okay. I have got people in Ukraine,” he said.

On Sunday, February 27, Putin ordered his military to put all nuclear “deterrence forces” on high alert indicating the possibility of a nuclear war. Although no nuclear weapons have been launched yet, the news on Sunday created fear in people around the world.

Since the invasion started on February 24, the total Ukrainian death toll has crossed 2,000 including troops, civilians, and children, according to the country’s sources. President Volodymyr Zelenskyy said that over 9000 Russian soldiers were killed in combat whereas the Russian defense ministry denied the claim. According to them, only 498 troops were killed by Ukrainian forces.

On Thursday, March 3, a Ukrainian official reported 21 deaths by Russian soldiers in the past 24 hours. The deaths were reported from Kharkiv where the Russian troops attacked with heavy fire from rocket launchers and airstrikes.