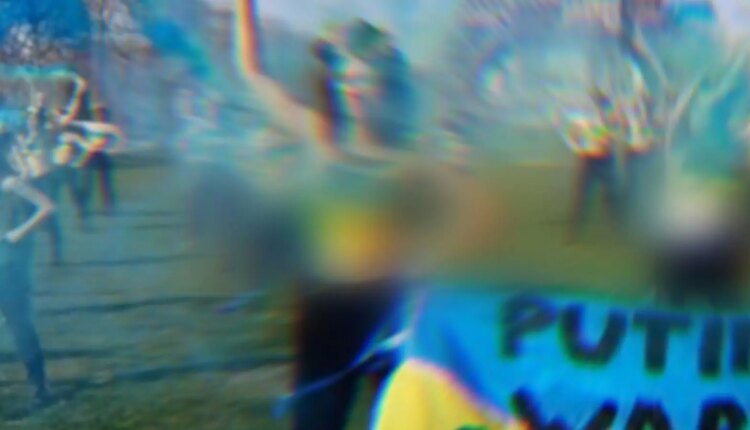 Feminist group Femen held a topless protest in Paris against Russian invasion of Ukraine. With the colours of Ukrainian flag painted on their bodies, 50 activists gathered on the Champs-de-Mars in front of Eiffel Tower. The group which was founded in Ukraine is based in France now. The women protesting in Paris had slogans like #StopPutinsWar and #PutinWarCriminal painted on them. The video of the protest was tweeted by media company Visegrad 24. In their website, Femen wrote: “Vladimir Putin is currently taking the whole Ukraine in hostage, civilians are being killed and tortured. They can’t run away. Putin is wiping a country off the map.”

The group demanded that Ukraine should be integrated into the European Union. “Ukrainian’s only crime today is to fight for their freedom, for their desire to be free and sovereign in their country. We must react firmly to the absolute violence inflicted by a dictator with imperialist ambitions whose trademarks are confrontation and repression. Today, by declaring war on Ukraine, Putin is above all declaring war on democracy,” Femen said in a statement.

The group has been organising topless protests against sexism, sex tourism, homophobia and other issues since its formation in 2008. Femen was formed after stories of Ukrainian women being sexually exploited abroad started appearing. In 2013, five members of the group had surrounded Russian president Vladimir Putin at the Hanover Trade Fair.

The World Health Organisation has said that attacks on hospitals, ambulances and other healthcare facilities have increased in Ukraine. More than 1.7 million people have fled Ukraine since Russia launched its full-scale invasion on February 24, according to the latest data from the United Nations on Monday. UNHCR, the UN Refugee Agency, recorded 1,735,068 refugees on its dedicated website, just over 200,000 more than the previous count on Sunday. UNICEF, the UN children’s agency, believes around half of them are youngsters.