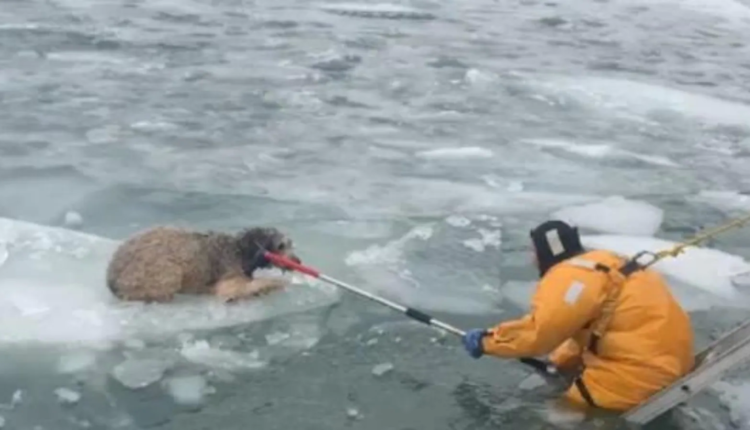 A video of rescuers rescuing a dog to safety after it got stuck on a frozen Detroit river has gone viral. The poor dog was separated from its owner while out on a walk and got stranded on a block of ice drifting down an icy river in Michigan, USA.

On March 2, the Wyandotte Police Department posted a video of the dramatic rescue on Facebook. The video was provided as part of the department’s weekly evaluation.

While releasing the video, the department wrote, “The poor pooch somehow managed to climb onto an ice chunk but it was drifting away in the river while the labradoodle was freezing.”

The Wyandotte Police Department went on to say that their crew was able to move the ice block closer to the river bank and that an officer used a “catchpole” to grab the dog by the neck. “The rescuer did this while standing on a slippery ladder that was submerged in the river while his coworkers held onto him via a rope,” the caption further read.

Since its release, the heartwarming video clip has received over 16,000 views and hundreds of comments. Many on Facebook applauded the police engaged in the spectacular rescue. Others were relieved that no one was injured during the rescue.

A Facebook user said, “The pooch didn’t have to worry about the WPD and FD there.”

This wasn’t the first time a rescue video went viral on social media. On February 27, Colorado wildlife officials rescued a mountain lion from a residence in Boulder city.

Surprisingly, the big cat was spotted hiding beneath a deck by the owner’s pet dog. The video of the big cat being rescued quickly went popular on social media.

Groom Defends Taking Dowry, Threatens to Call off Wedding if Demands Not Met