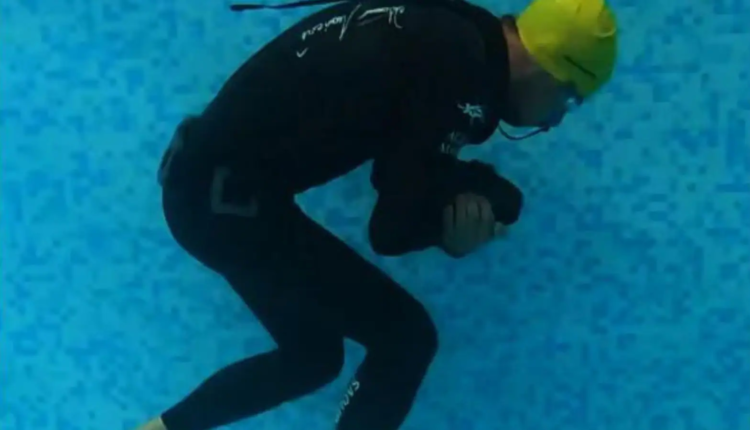 Maričić walked a little over two laps of the 50-meter swimming pool and held his breath for an incredible three minutes and six seconds. (Photo: Guinness World Records website)

Croatian freediver Vitomir Maričić broke the record for “the longest underwater walk with one breath (male)” on Friday, according to the Guinness World Records. Maričić shattered the previous record of another Croatian freediver, Boris Milosic, who had walked 96 metres underwater in March 2020, by walking 107 metres. Maričić set out to beat the world record in order to raise awareness for Thallassotherapia Opatija’s freediving research. Thallassotherapia Opatija is a Croatian hospital that treats heart, lung, and rheumatic disorders. The world record-breaking walk took place in the same hospital’s swimming pool on September 17 last year. It will not only “help shape the sport and its safety,” but will also aid the area of medicine in general, according to Maričić.

An incredible 107 m (351 ft 0.5 in) underwater walk with just one breathCongratulations to Croatia’s Vitomir Maričić https://t.co/pi8KLqHFsF

Maričić walked a little over two laps of the 50-meter swimming pool and held his breath for an incredible three minutes and six seconds, according to the Guinness World Records website. He carried weights in his arms to ensure that one of his feet remained on the ground. Maričić informed Guinness World Records that he did not rehearse much for the underwater stroll because his freediving routines provide him with plenty of breath-holding practice. Maričić, a well-known professional freediver, won the Freediving World Championship last year in Belgrade. He has previously won two bronze and one gold medal at the AIDA Freediving World Championships in Limassol, Cyprus, in 2021.

He believes he can “easily shatter” a number of other Guinness World Records titles if he had the “perfect situation.” Furthermore, Maričić claims that he could easily beat his own record too.

Maričić enjoys pushing his body and mind to their limits while freediving. Due to the inherent risks of holding one’s breath for such long lengths of time, it is recognised as an extreme sport. As a result, sportsmen must always be in top physical and mental shape.

“It can really tell me what kind of overall shape I’m in,” he said