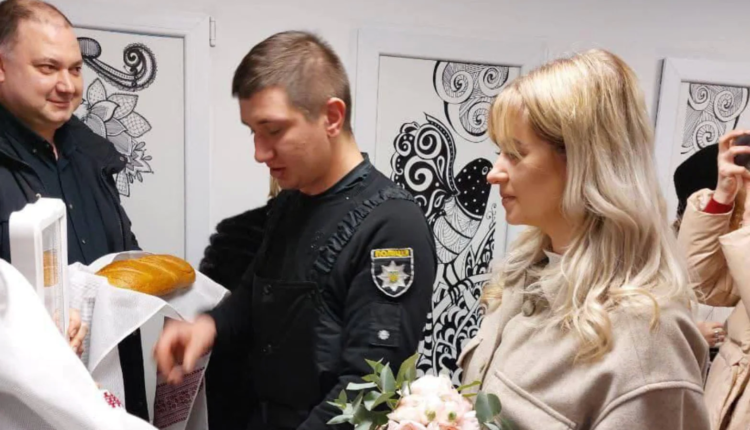 As Russian invasion of Ukraine continues, amid the turmoil are emerging events and occurrences that instill hope in the hearts of the citizens. With the air filled with smoke and the sound of sirens, a couple tied the knot in a bomb shelter in the city of Odesa, proving that life finds its way despite sabotaging situations. Surrounded by their loved ones, the newlyweds Klevets and Natalia Vladislava, celebrated their relationship with drinks, laughter, and a fair share of tears. Pictures of the ceremony show the bomb shelter wedding. The images feature the guests at the wedding surrounding the bride and groom. The groom is in a uniform while the bride is holding a bouquet. Sharing the pictures on Twitter, a Belarusian media house wrote in the caption, “Meanwhile, a marriage registration took place in a bomb shelter in Odesa.”

Signing the documents, the couple hugged and kissed, establishing their love while the people around them cheered, as seen in a video of the ceremony shared by The Independent.

Meanwhile, a marriage registration took place in a bomb shelter in #Odesa. pic.twitter.com/xAi8ktCxfE

Moments such as these keep surfacing on social media as the war with Russia is raging with each passing day. Here’s another video from the bomb bunkers of Odesa that is housing Ukrainian citizens. In the clip, a family is celebrating the birthday of their grandmother. The video is captioned, “Celebrating birthday to the sounds of sirens.”

Celebrating birthday to the sound of sirens.

The family in the Odesa region made a bomb shelter in the basement of their private house. And right there they congratulated their grandmother on her birthday.

The birthday lady was touched and wished us victory!#WARINUKRAINE pic.twitter.com/4G240VO2wP

How to Apply for Jio Broadband (Jio Fiber) Online