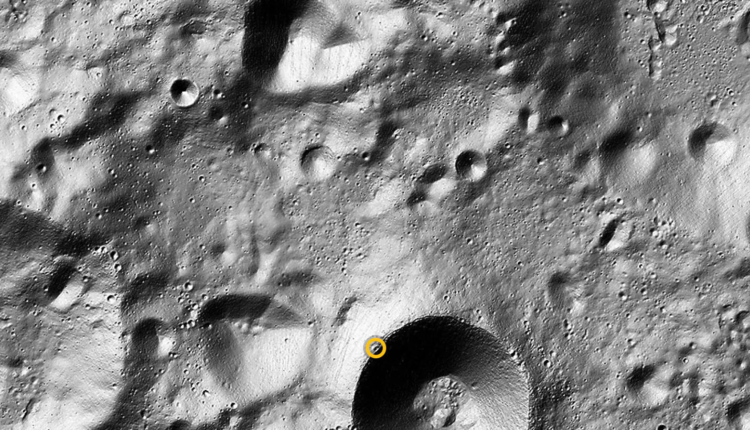 After seven-year of space odyssey, a three-tonne piece of Chinese rocket debris slammed into the Moon, creating a 65 feet wide crater on the lunar surface, the media reported. According to experts, the event took place at 7:25 a.m. EST on the lunar far side, on Friday, Space.com reported. As a result, NASA`s Lunar Reconnaissance Orbiter could not get a look at the crash. “We certainly have an interest in finding the impact crater and will attempt to do so over the coming weeks and months,” John Keller, the deputy project scientist for the Lunar Reconnaissance Orbiter mission, emailed to The Verge in a statement.

“We will not be near the impact site when it takes place so we won`t be able to directly observe it. The onboard narrow angle cameras have sufficient resolution to detect the crater but the Moon is full of fresh impact craters, so positive identification is based on before and after images under similar lighting conditions, he added.

The doomed space debris was first reported by Bill Gray, an astronomer running Project Pluto. In his blogpost, Gray first claimed that the debris is from billionaire Elon Musk owned SpaceX rocket.

But later Gray predicted that the object is a leftover piece of a Chinese rocket, specifically a Long March 3C that launched China`s Chang`e 5-T1 mission to the Moon.

In an another case, a rocket launched by American billionaire Elon Musk’s company SpaceX back in 2015 is all set to crash into the lunar surface, and it might lead to a legal conflict. The fast-moving piece of space junk, which is all set to hit the surface of the moon is the upper stage of a SpaceX Falcon 9 rocket that hoisted the Deep Space Climate Observatory satellite off planet earth. Since the launch of the satellite the ill-fated Falcon 9 has been chaotically looping around Earth and the Moon ever since. However, the crash at the lunar surface could soon mean a giant lawsuit for Musk.

Speaking to Forbes attorney Steven Kaufman, who co-heads satellite practice at the law firm Hogan Lovells, said that Musk can be sued theoretically but in practical terms that outcome is not that certain.