Building a Scalable and Maintainable Front-End with Component-Based Architecture 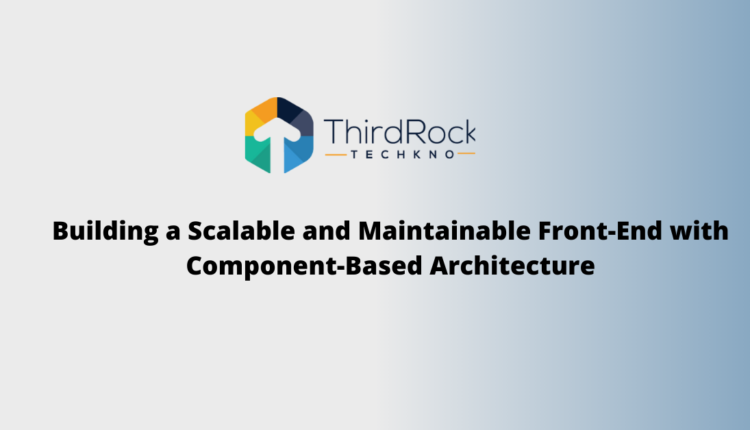 A competent front-end development plays an important role in making the app successful at the market. Moreover, there are a myriad of front-end frameworks and libraries that make it easier to create reusable UI components.

In this blog we will break down component based architecture in a systematic form. In addition, we will see how CBA differs from Model-View-Controller (MVC) architecture and the future of CBA.

Why do you need Component Based Architecture?

One of the major advantages of component based architecture (CBA) is that components are independent. Thus, if the developers refresh one component, it will not affect others in the UI as a whole. Moreover, ReactJs uses virtual DOM and handles the components in an extremely performant way.

In CBA, it is essential that all APIs and methods related to a single component must exist within the structure. Therefore, the developers here don’t have to waste time in finding what function pertains to what part. Moreover, the components are reusable. Thus, if your business organization wants different copies of reused features to act independently, CBA is best for you.

Difference between CBA and MVC

In component based architecture, the splits happen vertically while it is opposite in Model-View-Controller. This means that in case of CBA, the split happens component-by-component basis. Thus, logic, design and helper methods all stay in the same architecture in CBA.

In the MVC framework on the other hand, the developers would have templates that present the UI. In addition, there are services that define the helper functions. Also there are routes that determine which templates to render.

Component based architecture has been revolutionary in its own right. Now we will explain how top organizations used CBA to their benefits. Let us see:

·         All the components were generated and documented with Storybook docs. Moreover, they had a used guide for non-technical users as well

·         The interactive components acted as a boon for the developers and designers. It allowed them to use it without installing

The component based architecture was instrumental in benefiting Walmart to a great deal as well. With ReactJs, it was easier for the developers to reuse the components, but there were still many challenges.

The business of Walmart is far and wide. It has 12 websites in 11 countries. Thus, it is understood that the engineering team at Walmart works under extreme pressure. To resolve this, the team used a solution called Electrode Explorer in 2016. This improved the productivity of the website. Furthermore, it allowed creation of new tools for future scalability as well.

As Electrode Explorer is an independent web app, it frees the developers from installing components locally. The component based architecture also enabled the teams to view each component with an auto-generated demo.

The future of CBA

There is no doubt that the future of component based architecture is up and shining. With its prolific advantages, it is gaining a lot of traction in the developers’ community. One of the biggest USPs of CBA is that it represents architecture that encourages freedom. Moreover, ReactJs has popularized this concept. Besides, the Angular2 and Ember.js development teams are making efforts to incorporate components effectively.

Component based architecture is brilliant for developers that want control over their apps. CBA also gives a great range of customization to the developers, helping them a great deal.

What I’ve Learned From A Year Without Alcohol