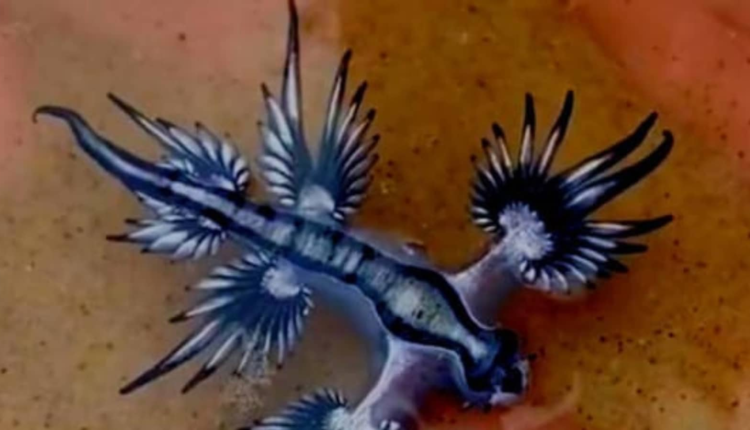 Ever heard of anyone giving a “kiss of death” to a poisonous sea creature? Well, if you haven’t, here’s Juliano Bayd for you. The Austrian TikTok star, who claims to be a marine life expert, has pulled off a daredevil stunt of kissing a sea dragon. The creature, which is, in reality, a poisonous blue slug, can administer fatal bites to a person.

In the video, where he is seen handling the tiny creature, he gives out a warning to viewers and says: “Kiss of death, please don’t imitate, I am a professional!” The video is seemingly filmed at a beach where this creature had washed up at the shore, reports the Daily Star.

“So today we found the biggest blue dragon I’ve ever seen in my entire life,” he says about the dragon. “Look at the size of him, he’s absolutely enormous,” he adds, laughing.

After that, he gives an animal a careful kiss and releases it back into the water.

The blue dragons, whose scientific name is Glaucus Atlanticus, are sea slugs, part of the ‘blue tide’ group of animals that includes bluebottle jellyfish.

This video stunned viewers, who warned him that he was playing with possible death.

“Why would you kiss it if it’s poisonous? Put that down,” said one viewer.

A second person said, “How are you not dead? It’s dangerous, don’t touch it.”

The blue dragons are venomous and feed on poisonous jellyfish. They also store the jellyfish poison to use against any possible predators that might attack them.

Melissa Murray, an expert from the Australian Museum, has issued a warning to people not to touch any blue dragons or pick them up using their hands.

“The glaucus atlanticus normally has tentacles in its system. If another creature tries to eat it they use the tentacles as a defence mechanism,” she said.